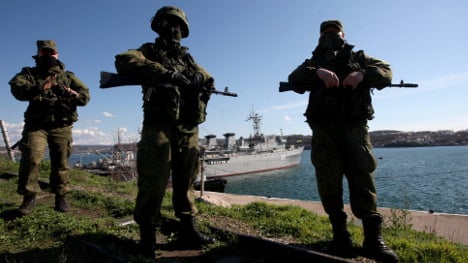 Handing out glasses of Crimean "champagne", a young hostess reeled off her PR spin on the merits of the Ukrainian peninsula, now the main flashpoint of what has been described as the worst crisis since the end of the Cold War.

She stood in front of a huge poster of Kiev's Maidan square, which was turned into a war zone late last month when dozens of demonstrators were killed in clashes.

Visitors at the March 5th-9th fair, one of the world's top events in the tourism industry, drank the Ukrainian bubbly put paid little attention to the holiday pitch.

"We're hoping for a good season. The situation in the country is not stable but it's not war," said Kateryna Suprovych, in charge of promoting Crimea's tourism.

Pro-Russian forces have taken over Crimea, a Russian-speaking region that is home to resorts such as Yalta but also to a huge Russian fleet playing a key role in soaring regional tensions.

"We'll see what happens during the tourist season, which starts in April and ends in October," said Suprovych when asked about any cancellations.

Crimea has a proud history as a holiday destination, attracting tens of thousands of Ukrainians and Russians every summer, as well as a growing number of Germans and Poles.

Ukrainian tourism grew substantially in 2013, and officials at the Berlin fair said their goal was to double arrivals over the next eight years.

Some Ukrainian tourism officials in Berlin admitted that the sector was taking a hit from the crisis, which has left Moscow and the West in a high-stakes standoff.

"Right now, we're working on the 2015 season, hoping that tensions will have ebbed," said Marta Naumenko, from the tourism board for the western city of Lviv.

Her stand is aptly wedged between those of the United States and Russia. "Forecasts are difficult, it all depends on the political situation, and it isn't very clear right now."

SEE ALSO: 'Putin is the dealer, Germany the junkie'