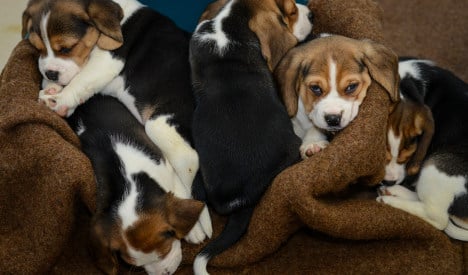 Some of the Beagle puppies rescued on Monday. Photo: DPA

The dogs were taken to the Nuremberg animal shelter where they were examined, vaccinated and placed in quarantine, the centre said on their Facebook page on Tuesday.

The shelter said the puppies, which included bull terriers, beagles and golden retrievers, were far too young to be transported.

“It’s disgraceful how these puppies are taken from their mothers far too early,” Dagmar Wöhrl from the shelter's animal protection society said.

Bavarian police confirmed the puppies were younger than their papers stated. They had travelled from Hungary and were found on Monday night.