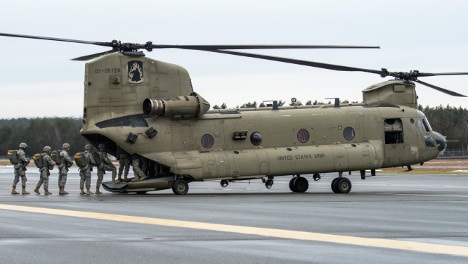 Troops boarding a helicopter at Grafenwöhr in Bavaria where 101 jobs have been lost. Photo: DPA

The military announced last week that 554 Germans directly employed by US forces would be made redundant.

But the communities around the army bases warned the knock-on effect would be far greater than the headline job loss figure.

Helmuth Wächter, the mayor of Grafenwöhr in Bavaria, where 114 German jobs are being slashed, told The Local: “This is not just bad news for our town but for the whole area.

"The US military is the biggest employer here. It is one of the most important parts of our economy.

“It [the job losses] will affect hotels, bars, restaurants – they all depend on it [the military].”

The changes were described as a “rebalancing” of forces by the military. The number of US troops in Germany has been slashed by around 11,000 troops – about a quarter of all those stationed in the country.

The cuts are part of US Defence Secretary Chuck Hagel's plans to shrink the US Army to its smallest size since before World War II.

Worst hit will be Kaiserslautern where the US military employs Germans to maintain vehicles.

More than 330 jobs will be lost there with another 59 in Hohenfels, Bavaria, and 154 in Baumholder in Rhineland-Palatinate.

Germans employed by the US military, known as “local nationals”, will not have to leave for another year.