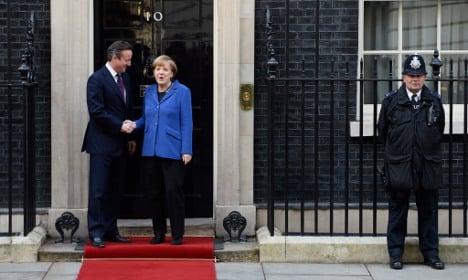 Merkel will hold talks with Cameron over EU reform but the British Prime Minister is unlikely to get any concessions. Photo: DPA
The British premier rolled out the red carpet in his bid to woo fellow conservative Merkel, who gave a speech to both houses of parliament before taking tea with the queen.
But Europe's most powerful politician was cool on Cameron's desire to change the EU's treaties ahead of a planned referendum on British membership of the bloc in 2017.
Merkel said in her speech to parliament that Britain and Germany shared the goal of a "strong and competitive" EU that was a "model for other regions of the world".
"In order to maintain this goal we need a strong United Kingdom with a strong voice inside the European Union," she said in English, after delivering most of the address in German.
However she admitted Cameron might be disappointed by her speech to members of the House of Commons and House of the Lords, the first by a German leader since president Richard von Weizsaecker's address in 1986.
"I have heard some expect my speech to pave the way for a fundamental reform of European architecture which will satisfy all kinds of alleged or actual British wishes. I am afraid they are in for a disappointment," she said.
Merkel appeared to open the door to reform a little wider in a press conference after she and Cameron held a lunch meeting at the prime minister's Downing Street residence.
Cameron said they discussed ways of cutting "excessive interference and meddling" by Brussels and of protecting member states like Britain that do not use the euro.
"Angela and I both want to see change in Europe and we both believe change is possible," he said.
Merkel offered some support for his concerns over EU migrants claiming social benefits, saying that if new arrivals got as much as long-term citizens there would be an "onslaught".
She added that while achieving consensus on reforms was "not a piece of cake", she was confident it could be done.
"If one wants Britain to remain in the European Union which is what I want, if one at the same time wants a competitive union that generates growth, one can find common solutions," she said.
She then headed off to have tea at Buckingham Palace with Queen Elizabeth II.
Live updates from Merkel's speech

Chancellor says Germans will never forget they owe Europe for its peace, prosperity and peace. "What we do now will decide Europe's future."

"Our ideas may vary," she says but Germany and Britain share a goal of a more competitive Europe.

Merkel warns Europe will fall behind without more research. "In many areas we are no longer among the best," she says, particularly online. "Never again should taxpayers have to foot the bill" for the mistakes of banks and financial institutions, Merkel says.

"The European Commission may only regulate where member states have not passed sufficient regulation themselves," she says.

Point for Cameron – "We need to cut unnecessary red tape at the European level."

"We have to make better use of the strengths of the EU," Merkel tells Parliament.

For Europe to prosper it must take advantage of growth in other parts of the world and take down more trade barriers, Merkel says, praising the US-EU trade pact.

Merkel argues Europe must stick together and make the EU as a better place. "I see Great Britain as an important ally in this endeavour."

She says von Weizsaecker's words still relevant today. Europe must stay together and stand up together she says.

"The global balance of power has changed drastically," she says quoting Richard von Weizsaecker, the last German leader to speak in Parliament in 1986.

Merkel says she is "firmly convinced" that Europe's ambition must be to emerge stronger from the crisis.

"To maintain freedom of movement we need to muster the courage to spot our mistakes and tackle them," she says.

Merkel tells her audience Europe needs to be reformed in keeping with the times.

We, the United States of America, and Europe could "not wish for a better partner".

Britain and Germany "shoulder responsibility jointly" in the hotspots of today, she says.

The chancellor warns the last war in Europe broke out less than a generation ago (the Balkans).

"We need to continue to stand up against extremism…that still exists in Europe today."

Merkel calls for EU to be a force of good in the world, spreading freedom and prosperity.

"We must renew Europe in keeping with the times."

"We need courage to bring about change for the better today, just as it was needed decades ago," she says.

"Today the challenge we face is whether Europe will be able to exert its interests."

Says it is right that all 28 EU member states shape European policy. "Together we change Europe for the better."

Merkel says EU today seems "almost like a miracle" in hindsight with the peace and prosperity it has brought.

"The UK has no need to prove its commitment to Europe," she says referring to Britain's role in defeating Nazism.

Says 2014 makes it incumbent to remember the events of the past together.

Merkel has now switched to German, praising the British Parliament.

Speaking in English, Merkel said she was very aware of the "very great honour bestowed" upon me.

She tells her audience of her first visit to London in 1990 with her husband, after the fall of the Berlin Wall. "It was a terrific trip," she said.

Merkel says she is "caught between the devil and the deep blue sea" over EU reform and is aware of the great expectations of her speech.

"I simply want to share my thoughts with you," Merkel tells the audience.

Speaker of the House John Bercow praised the Chancellor in his introduction as a "proven friend and partner".