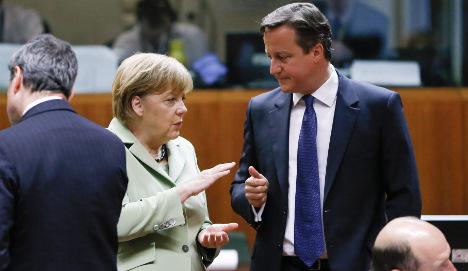 The British may be rolling out the “reddest of red carpets” for Merkel – tea with the Queen, an address to both Houses of Parliament – but for the chancellor this is not even the most important foreign visit of the week.

That came on Monday and Tuesday, when she took members of her cabinet to Israel and stayed overnight. Compare that to her UK tour which will last six hours.

Merkel will be given virtually every possible honour in London on Thursday and the trip is a great moment to show how strong the UK-German relationship is. But the problem Cameron faces is Merkel simply cannot deliver the EU reform he wants and needs and she has little interest in doing so.

Both want a more competitive EU and Germany does not wish to see the UK leave the 28-member bloc.

But Merkel is not prepared to make concessions to Cameron in order to make his life easier. Come 2017 when there may or may not be a referendum in the UK on EU membership, Merkel will have finished her third term.

Europe depends on balances of power but in this relationship Merkel seems to be holding all the cards.

Nothing puts a person off like the smell of desperation. Cameron’s red carpet reeks of it.

Compare tea with the Queen and speaking before both Houses of Parliament to the visit of French President Hollande at the end of January. He got a pub lunch in Oxfordshire.

'Nothing is free in London'

The lack of importance attached to Merkel’s visit in Germany is reflected by the domestic press which only started covering it on Thursday. And that coverage has not been favourable to the British who have been accused of “hype” and having unrealistic expectations.

For the Süddeutsche Zeitung the British Prime Minister “can’t show enough how important he is to her”.

Meanwhile, the Spiegel wrote: “Cameron is sparing no expense to win the Chancellor round to EU reforms but Merkel is following her own agenda.”

“The opulent programme” is designed to impress the guest from Berlin, it said. “But nothing is free in London.”

“In return for nice photos with the Queen, Cameron expects support for his EU reform.”

It also accused Cameron’s Conservative Party of overestimating Merkel’s influence in the EU. “All 27 states would have to agree to Cameron’s treaty change and the majority of them have little interest in that,” it noted.

“Cameron wants more than Merkel wants to give”, ran the headline in Die Welt on Thursday.

It accused the Conservative coalition government of having “unattainable expectations”.

“The difference in expectations around the visit on the two sides of the Channel could not be more different,” it said.

It also noted how the British press had been building up the visit for weeks, while German papers are leaving the job to their London correspondents rather than sending extra journalists to cover the trip.

SEE ALSO: British Embassy cordon could be lifted after 11 years