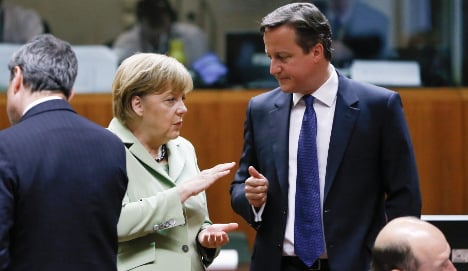 Merkel and Cameron will meet in London on Thursday where the UK leader will attempt to get the Chancellor's backing for EU reform. Photo: DPA

But in trade and energy policy, Germans wanted the EU to take the lead. The majority of Britons and Germans also thought the single market offered by the EU was beneficial.

Director of Open Europe Berlin Michael Wohlgemuth said: “Even though Britons are traditionally more eurosceptic than Germans, public opinion in Germany is increasingly getting closer to British views.

“Eurosceptics are only a minority in Germany. The majority of Germans are, however, critical of the EU in some key policy areas.”

Only eight percent of Britons and 21 percent of Germans thought the European Parliament, rather than national parliaments, should have the right to block new EU laws.

“If he is to make this a reality, he must now set out a series of proposals for reform that can be road tested with leaders and electorates across Europe,” Booth said.

“It is clear that Britons and Germans agree that the European Parliament is not the answer to the EU’s democratic deficit. National parliaments remain the ultimate source of democratic legitimacy and accountability and must therefore be given a greater say in the EU decision making process.”

Merkel will visit the UK on Thursday where she has been given the rare honour of speaking before both Houses of Parliament. She will also have tea with the Queen.

It is being seen as an attempt by Prime Minister David Cameron to get Merkel’s support for his bid to claw back certain powers from Europe.

But observers are sceptical that Merkel will give in to Cameron's demands for reform.

"I think her hands are very, very tied by her 'grand coalition' in Berlin," Simon Hix, professor of European politics at the London School of Economics, told AFP.

How do Germans view the EU?

The YouGov poll also found Germans were divided on the future development of the EU.

The study also found little support in both countries for EU budget increases with only seven percent in the UK and 12 percent in Germany in favour of a rise in spending.

In Britain, 52 percent of voters said the single market was an advantage compared to 74 percent of Germans.

The study added: “The shared British and German view that the single market is beneficial but that more policies should be decided nationally rather than at the EU level suggests an appetite in both countries for a slimmed down, more trade focused EU.”