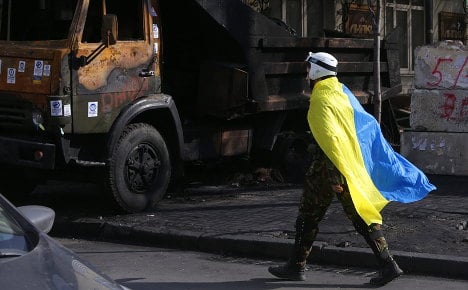 A lot of observers in Germany have commented on Ukraine being on the verge of economic collapse.

Turning the economy around is the key to sustaining the political freedom won in the bloody fights in Kiev over the last months.

German economists, businessmen and policy advisers have a lot to offer the new Ukrainian government to help it get on the path to economic reforms.

But one thing they should remember is that adopting Germany’s current policies will not boost Ukraine’s economy.

To become like Germany today, Ukraine will need to adopt policies closer to those Germany did in the 1950s.

Ukraine cannot afford to have the state spending at the current German level of about 45 percent of GDP. A state share of about 30 percent – as in 1950s Germany at the time of the Wirtschaftswunder (Economic Miracle) – could work much better.

The EU policy package which allowed the Baltic countries to become the richest among the former Soviet states should also be applied to Ukraine.

German politicians may not want to promote limited government intervention in the economy given their stance at home, but they really have to if they want to see Ukraine developing rapidly.

Slavic names are tricky. It might very well take a German speaker a week to remember and learn to pronounce a new Ukrainian politician’s name, but German politicians should resist the temptation to stick to the ones they’ve already learned, like Tymoshenko or Klitschko.

The uprising showed that Ukrainians are distrustful of their old political leaders – even those who opposed the regime of President Yanukovych.

They have their reasons to be and the democratic cause in our country will only succeed if foreign countries – be it the West or Russia – restrain from picking a favourite before Ukrainians have actually gone to the polls.

3. Get rid of the visa wall

According to research from 2012, only 17 percent of Ukrainians have ever been abroad beyond Russia, Egypt and Turkey – the latter two are popular budget vacation destinations.

One of the key reasons for that is the strict visa regime western states adopt against Ukrainians.

It is hard to build a democratic country when you have never been to one. It is also hard not to consider sympathizing with some sort of nationalistic ideas if you are treated as a second-class citizen by a German border-guard just because it says “Ukraine” in your passport.

It is also difficult to believe western officials are sincere about their support for democracy in your country when journalists at Ukrainian news outlets cannot get a multi-entry Schengen visa, and applying for a single-entry one takes months.

4. A bailout is not the only solution

Ukraine’s finances are in such a troubled state that an IMF loan might be the only realistic short-term solution, but this won’t save Ukraine’s economy in the medium-run.

This, however, doesn’t mean there is nothing Germany can do to help Ukrainians in their economic hardship.

For one, Germany could lobby the EU to cancel tariffs EU businesses have to pay for trading with their Ukrainian counterparts.

If the EU and Germany are serious about helping economic development in Ukraine, they have to step beyond the current “deep and comprehensive free trade areas agreements” offered to the non-EU eastern European states.

Import quotas that “protect” EU consumers from buying too many Ukrainian goods do more harm than good.

Maria Semykoz is originally from Ukraine but now works as a management consultant in Berlin. She has written for Forbes, National Review and Daily Caller and has an M.A. in Political Economy from Miami University, Ohio.

SEE ALSO: The German pastor in Kiev who helped the injured