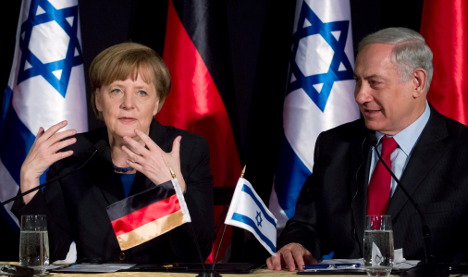 Merkel and Netanyahu give a press conference at a hotel in Jerusalem on Tuesday. Photo: DPA
"We are looking at the settlements issue with grave concern," Merkel said at a news conference with Israeli Prime Minister Benjamin Netanyahu. "We hope it will not stand in the way of a two-state solution and that we can overcome it."
Since Israeli-Palestinian peace talks were launched after intense US efforts last year, Israel has advanced plans for more than 11,700 new settler homes, infuriating the Palestinians and drawing condemnation from the international community.
Settlement building is illegal under international law.
Merkel, who did not plan to meet with Palestinian officials on the visit, reiterated that Germany adhered to the EU position on settlements, which under guidelines published in July prohibits financial dealings with settlement-based entities.
She stressed, however, that Germany "does not support boycotting" Israel proper.
European companies have begun to divest from Israeli organisations with ties to West Bank settlements, prompting accusations of hypocrisy from Israeli leaders.
"Those who call for boycotting Israel are not calling for the boycott of any other country," Netanyahu said.
"They  blame only the Jewish state, and singling out Israel – the one true democracy in the whole Middle East – is neither moral, or correct or productive, because actually these boycotts push back peace."
The progress in talks between world powers and Iran over its controversial nuclear programme was also high on the agenda during the German leader's visit.
Israel, which views Iran's nuclear drive as its greatest threat, has been highly critical of diplomatic efforts to resolve the dispute by easing sanctions on Tehran in return for it freezing or scaling back its nuclear activities.
Merkel admitted there was "disagreement" with Netanyahu over holding talks with Tehran.
Germany, as well as the five permanent members of the UN Security Council – Britain, France, the United States, Russia and China – reached an interim agreement with Iran in November and are now aiming for a comprehensive accord.
Western nations and Israel have long suspected Iran of seeking a nuclear weapons capability alongside its civilian programme, charges denied by Tehran.
Israel is the sole if undeclared nuclear-armed state in the Middle East.