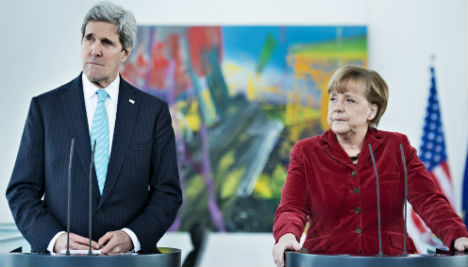 US Secretary of State John Kerry and German Chancellor Angela Merkel address the press at the Chancellery January 31, 2014 in Berlin. AFP Photo/Brendan Smialowski

"We need, as soon as possible, a stable two-country solution, with a Jewish state of Israel and at the same time a state for the Palestinians," Merkel said in her weekly podcast.

"We also support the efforts made by US Secretary of State Kerry (and) I will of course use my stay to bring up this issue with the Israeli prime minister", Benjamin Netanyahu, she added.

Merkel, who will be in Israel Monday and Tuesday, recalled that for historical reasons Germany was particularly committed to Israel's right to exist.

Palestinian president Mahmud Abbas said Friday that US attempts to forge an agreement on a framework for peace talks with Israel had so far failed but that the efforts are "extremely serious".

Abbas met with Kerry twice in Paris this week in what a US official described as "constructive" talks.

The top US diplomat has spent months trying to get the Israelis and the Palestinians to agree on a framework to guide talks towards a full peace treaty, but the negotiations have shown little sign of progress, with each
side blaming the other.

Germany and Israel have held regular "government consultations" since 2008, an arrangement where the two sides meet at regular intervals to discuss specific topics.

Merkel's visit will be the fifth such meeting between Germany and Israel. The last one was held in Berlin in December 2012.