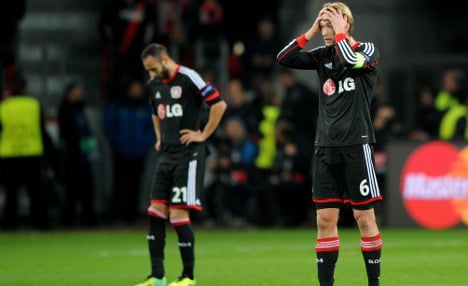 Leverkusen were outplayed by PSG at home on Tuesday night in the Champions League last 16 tie. Photo: DPA

Leverkusen, second only to Bayern Munich in the Bundesliga, suffered their third straight home defeat as Laurent Blanc's PSG were rarely troubled at the Bay Arena with Ibrahimovic the architect of the victory with two goals in three first-half minutes.

"We had a good start and when you are one goal up, it's easier, it gives you space," said Ibrahimovic.

"We had a good first half and continued to play our game after the break, when they played with one less, so it was a good day."

Left winger Blaise Matuidi put PSG ahead with barely two minutes gone before Ibrahimovic netted a penalty, then added a second when he unleashed a thunderbolt of a shot to make it 3-0 at the break.

It meant 32-year-old Ibrahimovic replaced Cristiano Ronaldo as the competition's top-scorer with 10 goals in six Champions League games this season after the Swedish star also netted four in the 5-0 rout of RSC Anderlecht in Belgium last October.

"I have an embarrassment of riches in my team at the moment," said PSG's contented coach Blanc.

Bayer were reduced to ten men when Ibrahimovic's marker Emir Spahic was sent off for a second yellow, and the subsequent red, for the final half an hour.

Sami Hyypia-coached Leverkusen now face an unenviable task to try and salvage something from the return leg in Paris on March 12th.

Leverkusen defender Omer Toprak complained: "In the first half, we played without motivation, with fear. I don't know why we played like that but in any case, we played very badly. Paris walked over us. It was too easy for them."

The Italian right winger put a superbly timed ball in behind the Leverkusen
defence which Matuidi slotted home.

It could have 2-0 after ten minutes as Ibrahimovic's shot cannoned off Roberto Hilbert's torso, with the right-back the last defence with the hosts' back four in disarray.

Having lost their last two home games, Leverkusen started to find their rhythm after the initial setback with striker Stefan Kiessling heading over from a free-kick on 19 minutes during a rare forage into the PSG half.

With just over 60 percent possession, it seemed only a matter of time before PSG added a second and Ibrahimovic struck with two goals in three minutes.

The first came when referee Viktor Kassai spotted Spahic pulling down Ibrahimovic in the area, booked the defender and awarded the spot-kick, despite furious protests from the Bayer defence.

Ibrahimovic slotted the penalty on 39 minutes and then gave the guests a commanding lead with a fantastic shot from just outside the area.

Matuidi found Ibrahimovic on the edge of the box and the Swedish star rifled a spectacular first time shot into the top right corner.

The hosts fortunes did not improve as Spahic, who had already been shown a yellow for the foul which led to Ibrahimovic's penalty, was booked again for holding back right-wing Lucas and sent off on 59 minutes.

Matuidi's replacement Cabaye then added the fourth on 88 minutes with PSG players lining up to score as the Leverkusen defence once again breached.