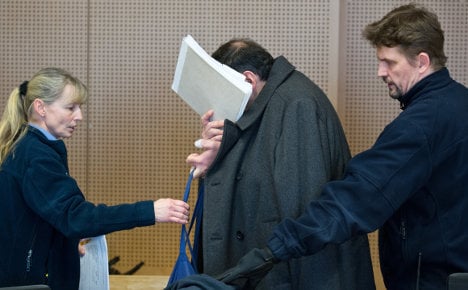 The accused allegedly attempted to murder his instructor in a suicide attempt. Photo: DPA

The man claims his flight instructor molested him in the air which then led to a fight.

He is accused of attempted murder by allegedly hitting the 73-year-old instructor around the head with the rock after the plane took off from an air strip in Strausberg, Brandenburg.

The Cessna light aircraft underwent an emergency landing last June after the fight broke out in the cockpit between the 52-year-old student and his instructor.

But the two gave conflicting explanations for the crash.

The trainee claimed his instructor sexually harassed him whilst in the air, causing the tussle, and after the plane touched down pulled out a knife, at which point the trainee hit him with a rock in self-defence.

The instructor, meanwhile, accused the trainee of attacking him while airborne, before trying to crash the plane in a suicide attempt.

After the emergency landing in a field left the single engine aircraft upended, the trainee fled the scene and was discovered by a search dog hours later, asleep in a clump of bushes, the BZ newspaper reported.

The case at the court in Frankfurt (Oder) continues.