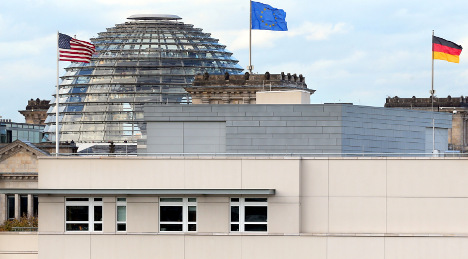 A reported listening station in the US Embassy in Berlin, metres away from the Bundestag has harmed relations between the US and Germany. Photo: DPA
Der Spiegel magazine reported on Sunday the German government was considering deploying its own agents to keep tabs on Western secret services and embassies on German soil including those of the United States and also Britain.
It said the domestic intelligence service aimed to glean precise information about foreign spies using diplomatic cover and technical equipment at diplomatic missions used to snoop on German officials and the country's
citizens.
"This step would be an about-face from the decades-long practice of systematically monitoring the activities of countries such as China, Russia and North Korea but rarely the activities of Western partners," Spiegel said.
It said the plans would require the final approval of Merkel's office as well as the foreign and interior ministries.
The reported initiatives follow leaks by former National Security Agency (NSA) contractor Edward Snowden that US intelligence agencies had eavesdropped on Chancellor Angela Merkel's mobile phone and collected vast amounts of
online data and telephone records from average citizens.
Media reports last year said that equipment installed on the roofs of the US and British embassies in central Berlin was used for snooping.
Spiegel also reports in its upcoming issue on a suspected attack by Chinese spies on the German government ahead of the G20 summit in Saint Petersburg, Russia last September.
It said high-ranking German officials from several ministries as well as banks had been sent Chinese cyber-espionage malware under the guise of an exchange of information among economic advisors to the G20 governments.
A government spokeswoman told Spiegel that the attempt "to compromise information security at the chancellor's office" had been successfully rebuffed.
Merkel said on Saturday ahead of a summit with French President Francois Hollande that they would discuss bolstering citizens' data protection with "European communication networks" that bypass US Internet giants.