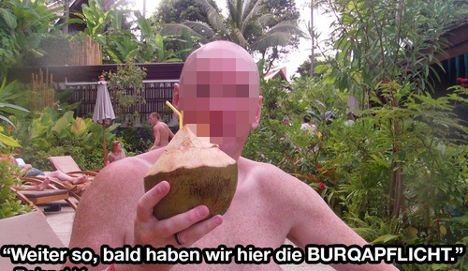 One of the commentators posted on the blog. Photo: Lookismus Gegen Rechts/screenshot

The blog, called Lookismus gegen Rechts, launched on platform Tumblr in February and has posted dozens of photos of people who have made racist comments online, including posts in support of the far right scene and the neo-Nazi party, the NPD.

It aims to expose those making the comments by publishing their Facebook photos or profiles next to their comments. It keeps the first name and photo of the commentator but deletes the person’s surname.

Stern magazine described the blog as a “bizarre collection of relatively hateful statements”.

Many of the photos are equally bizarre with the keyboard racists pictured on beaches, topless in snow and in swimming trunks.

The founder of the blog, who wishes to remain anonymous, told Stern: “I have set the bar high in terms of the hatred of the person and the stupidity of the comments [for it to appear on the blog].”

The blog aims to “take the wind out of the sails of” the commentators, the founder added.

He got the idea after reading a string of hateful comments on the Facebook page of a national newspaper which posted an article about the victims of right-wing violence.

Lookismus gegen Rechts has stirred a debate in Germany about whether postings online should remain anonymous or whether those who post racist comments should be named and shamed. On Twitter and Facebook the blog has been met with a mainly positive reaction. But is it going too far by posting photos and names?

Facebook locked the profile page of Lookismus gegen Rechts on Wednesday evening. By that point the page had 2,700 likes.

And the founder said that the far right commentators were “denouncing themselves” by making their posts public.