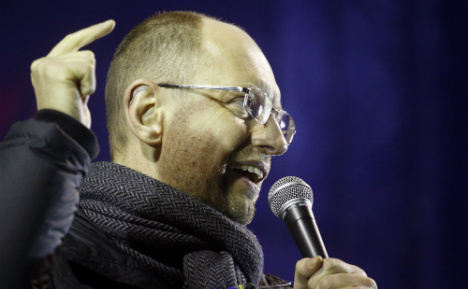 Germany's president and foreign minister on Friday met Ukrainian opposition leader Arseniy Yatsenyuk, who said they had spoken out in support of his people's "fight for freedoms and liberties."

Walking out of the closed-door meeting, Yatsenyuk told AFP: "Our German partners expressed their words of support to the Ukrainian people in their fight for freedoms and liberties."

He declined to give specific details of the exchanges, but said he had pleaded for broad economic support for his country, likening the aid needed to US reconstruction help for post-World War II western Europe.

"I asked for the Marshall Plan for Ukraine instead of martial law in Ukraine," he said.

Asked about the Ukrainian military's comments that President Viktor Yanukovych should take "urgent steps" to ease the ex-Soviet nation's worst crisis since independence, he said: "They try to intimidate us, to no avail."

Yatsenyuk, a trained lawyer, is a pro-EU former foreign minister who has taken a hands-on role in the protest movement, alongside former world boxing champion Vitali Klitschko, who was also expected at the Munich conference.

The turmoil in Ukraine is one of the major talking points at the Munich Security Conference, an annual event held to discuss military and political affairs.