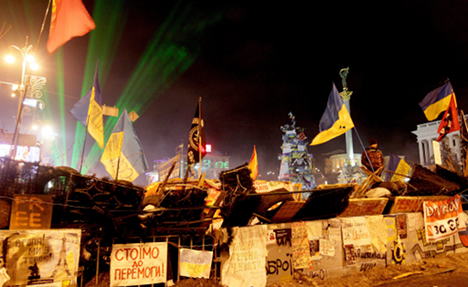 Chancellor Angela Merkel held telephone talks with the Russian leader asking him to "push at his end for a constructive dialogue between the opposition and government" in Ukraine, her said in a statement.

"The violence must not return. Ukraine needs to have a working government quickly. All parties must accept their responsibility to stabilize the country and protect the rights of citizens," the statement added.

However the Kremlin, in a carefully worded statement released after the call, rejected outside interference in Ukraine's affairs.

"Regarding the situation in Ukraine, it has been stressed that any outside interference is unacceptable," the Kremlin said. She also praised the scrapping on Tuesday of anti-protest laws adopted on January 16th that infuriated the protesters and deepened the crisis.

Merkel warned against fresh violence, calling for the protection of citizens' rights and a democratic solution to the crisis.

She said that the EU and Germany "are willing to provide assistance".

The chancellor has not hidden her support for the protesters, saying earlier on Wednesday: "They are fighting for the same values that guide the European Union, and that is why they must be listened to."