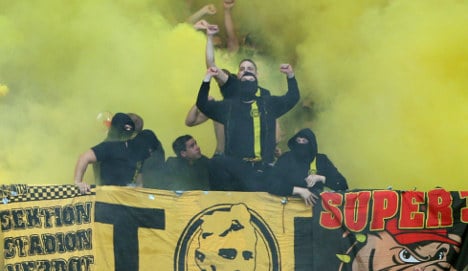 Dortmund fans at the Schalke game in October 2013. Photo: DPA

Trouble broke out at Schalke’s Gelsenkirchen Stadium in October 2013 in a derby against Borussia Dortmund.

Schalke has now responded by sending letters to around 500 Borussia fans banning them from the area around the stadium until 2019, the West Deutsche Allgemeine reported on Monday.

Dortmund fans let off yellow flares and fireworks and threw them onto the pitch, delaying the start of the match, but the violence was not as bad as the derby in 2012 when 180 people were injured.

Schalke said the 498 fans were being banned for their behaviour on October 26th last year which also included pulling the emergency brake on a train at Essen West Station.

Meanwhile, on Saturday a football fan in Cologne was badly beaten when hooligans from Dortmund, Cologne and Gelsenkirchen met in the city centre for a mass brawl.

“It was like a war film," one eyewitness told Bild newspaper.

The boldness of hooligans to meet in the city centre rather than in a secluded area has concerned police with the Bundesliga season starting again this weekend after the winter break.