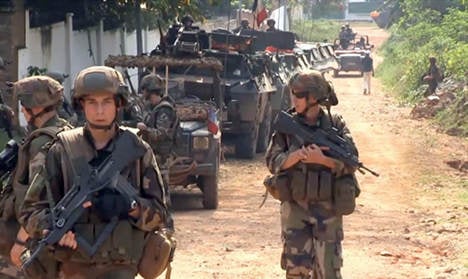 Germany will send four transport planes to support the French-led operation, after EU foreign ministers meeting in Brussels on Monday decided to deploy 1,000 EU troops to the region.

Escalating unrest between Christian and Muslim militia in the Central African Republic (CAR) has already led to 1,600 French troops being deployed, working alongside 4,500 troops from across Africa.

Hundreds of thousands of people have left their homes, and over two million are in desperate need of help, according to the latest reports.

Steinmeier told Sunday newspaper the Frankfurter Allgemeine am Sonntag that the EU should not “leave France alone”, but stressed on Monday that German troops would not be deployed.

Firm on his stance not to send German soldiers, Steinmeier agreed to the Bundeswehr helping with air transport.

Steinmeier said German help could be better used in Mali, another conflict-ridden African country. “There are good reasons help Malian security forces get themselves in a position to handle war,” the Social Democrat (SPD) politician said.

German soldiers are expected to head to Mali in the form of the Franco-German brigade.

It is thought that the majority of efforts from the incoming EU troops in the CAR will be concentrated at Bangui airport, as suggested by the EU's high representative for foreign affairs Catherine Ashton. She praised France's efforts in its former colony ahead of the meeting.

Germany has also remained out of the 2007-founded “Battle Group”, made up of troops from various EU countries and as of yet never deployed. It is, however, set to become a member of the group in the second half of 2014.

“We have to look carefully at where we should concentrate our efforts,” he said in the meeting.