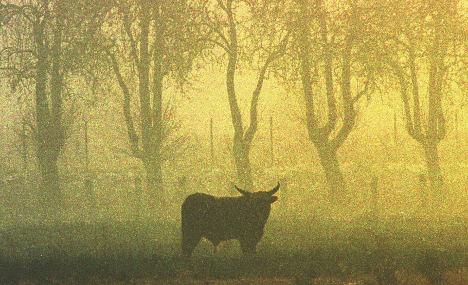 Not the bull in question. Photo: DPA

Although the animal had steered clear of china shops, it was creating concern in the area around Kallmünz near Regensburg, Bavarian Rundfunk radio reported.

It had escaped in the summer and had been hiding out in the Bavarian woods most of the time since then.

The owner had been so desperate he had even applied to the local veterinary office for permission to shoot and kill it – but this was denied.

Attempts to track the animal down over six months and shoot it with a tranquilizer gun failed, and it seemed the bull was set to continue its outlaw lifestyle.

But a vodka-grain cocktail was too good for him to resist, and he is now back in captivity.

A farmer Werner Dechant told Bayerische Rundfunk how the bull appeared on his farmyard.

First he tried to catch the animal with a rope while it was eating grain from a bucket. But the wily bull simply wandered off as soon as he got close.

He said he was too worried for the health of the bull to try a tranquiliser, but thought a bottle of vodka might slow him down.

And although the bull gobbled down the mix of grain and vodka, the cocktail was not strong enough to have much effect.

So a few nights later Dechant tried again – with two bottles of vodka in the bucket.

This did the trick, and he managed to get a rope around the bull's neck and shoo him into a barn.

The bull has now been returned to his owner – and will not be allowed out again.

READ MORE: The Local's top animal stories of the year