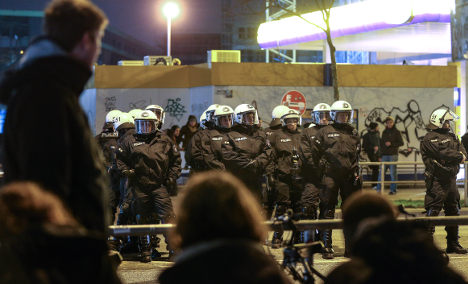 The restricted zone (Gefahrengebiet) was put in place last Saturday following a spate of attacks on police officers and demonstrations which turned violent. It covered the city centre and nightlife areas, giving police increased powers to stop and search anyone they wanted, and ban people from the areas.

On Thursday night the zone was reduced to three areas around police stations and on Monday police said in a statement they were lifting restrictions altogether.

The statement said: "By giving police extra powers, the establishment of the restricted zone sought to prevent crime and to better protect citizens and police officers.

“Since the establishment of the zone, potential troublemakers have been detected via targeted checking measures by the police and through this exercise serious crimes were largely prevented.”

The police added that there had been no further attacks on officers and the zone had therefore achieved its aim. But critics argued the zone only heightened tensions between police and demonstrators and also victimized ordinary citizens.

It put Hamburg in international headlines and sparked a warning from the US Embassy in Berlin to its citizens about travelling to the port city.

A petition calling for the lifting of the zone was signed by more than 8,000 people.

But in an interview on Monday, Hamburg's mayor defended the police tactics.

"The instrument has proved itself," Olaf Scholz told the Süddeutsche Zeitung.

He said he had no doubts over the constitutionality of the zones and the additional powers they afforded the police.

Scholz said the police found tools such as hammers, and fireworks during the hundreds of checks carried out. One man was caught on video as police confiscated a toilet brush he was carrying in the zone.

He rejected the many criticisms from people whose lives were disrupted, many of whom also said they felt threatened by the police presence in their neighbourhoods.

"Many residents said the opposite," said Scholz. "They felt safer."

He said the Social Democrats had to stand for law and order. "People who do not like it will not support it," he said.