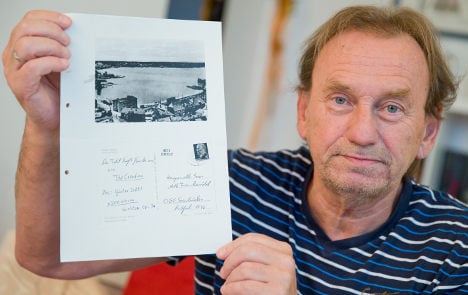 Zettl and his postcard. Photo: DPA

Günter Zettl was still at school in 1969 when he decided to enter the write-in competition being staged by the West German Saarlandische Rundfunk radio station.

Then 18, he had been listening to the radio from his home in Waren an der Müritz, in what is now Mecklenburg Western Pomerania.

The show "Hallo Twen" was staging a competition to win a record by the band The Creation.

"I thought: you know that group," said Zettl.

But he did not hear anything from the radio station, and figured he had just not got lucky. Now it turns out, his postcard had been intercepted and confiscated by the East German secret service, the Stasi.

Zettl eventually left East Germany for the West, and in 2010 decided to look at his Stasi file. His aim was to learn more about why he was forbidden to work as a teacher in the East – a ban which led to his leaving.

He had always assumed it was because he had failed to vote in a parliamentary election.

But he was stunned to find, among the papers the Stasi held on him, a photocopy of his radio competition postcard.

"I didn't have it in my mind at all," he said, but called in the original from his file.

"I sent it, 44 years later, to the Saarländische Rundfunk."

Even though the "Hallo Twen" show was cancelled 40 years ago, the radio staff hunted down a copy of the prize record, and will present it to Zettl.