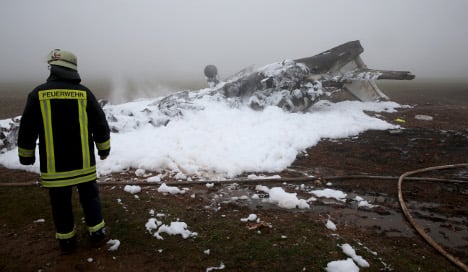 Police in Trier confirmed that everyone on board the jet died when it crashed near Rivenich in the Eifel region of Rhineland-Palatinate.

The victims were the pilot, the co-pilot, a 61-year-old businessman and his 60-year-old wife who were from the region.

The plane, a US-made Cessna Citation business jet, had almost reached its destination of Föhren, north of Trier from Shoreham Airport in West Sussex when it crashed at around midday.

According to Trier news site Volksfreund the plane belonged to a firm based in the region. According to the fire service the twin engine jet grazed a power line before crashing. Police also confirmed the plane had damaged an electricity pylon.

A witness called the emergency services, but the plane caught fire when it crashed and little could be done by the 50 firefighters to help those on board.

Crash investigators are now at the site.