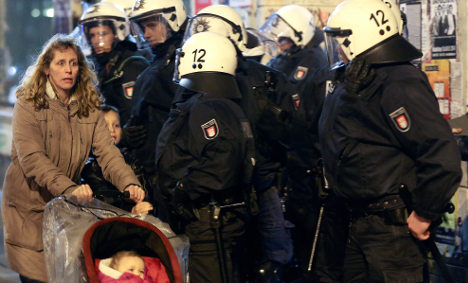 A woman pushes a pram past police in the restricted zone on Wednesday. Photo: DPA

The restricted zone (Gefahrengebiet) was put in place on Saturday following a spate of attacks on police officers and demonstrations which turned violent. It covered the city centre and nightlife areas.

But from Thursday night the zone was reduced to three areas and will only be in place from 6pm to 6am rather than 24/7, police said in a statement. “The establishment of a restricted zone aims, by giving additional powers to the police, to prevent crime in an area, and to better protect citizens, and in this case police officers as well," the statement said.

But critics argue the zone has only heightened tensions between police and demonstrators and also victimized ordinary citizens.

It has led to Hamburg making international headlines and sparked a warning from the US Embassy in Berlin to its citizens.

A petition calling for the lifting of the zone had been signed by more than 7,000 people by Friday afternoon.

Jens Kerstan, leader of the Greens parliamentary group in Hamburg, said the reduction showed that public pressure had an effect.

"It is good that the Social Democrats (SPD) realize that the large restricted zone was an excessive measure. However, we see the reduction as no more than the first step in de-escalation."

Trouble between police and left-wing activists started in December with the clear out of a squat called the Rote Flora and the planned demolition of a block of flats called the Esso Houses.

The police statement added that they would constantly evaluate whether to continue enforcing the zone.