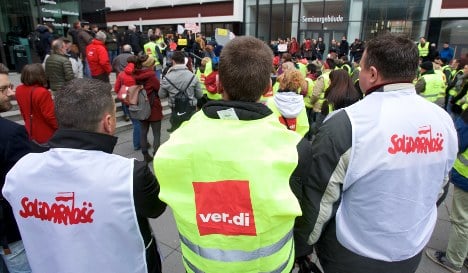 Amazon employees are protesting against union lead strikes which hit their factories in the run up to Christmas, it was reported on Monday.

A petition at the end of December in the major distribution centres in Leipzig and Bad Hersfeld collected over 1,000 signatures against a public "negative representation" of the internet giant.

T-shirts with the words "Pro Amazon" will be printed and sold to workers so that employees can display their support for their multinational employer.

One employee wrote on the Pro Amazon Facebook page: “We like working for Amazon and are happy here.”

Another said: “I was happy to get to work [for Amazon] over Christmas.”

But opponents of Amazon have also used the 450-member Facebook group to publicize their criticism of the firm. One suggested Pro Amazon t-shirts should read, “Against better wages.”

Amazon has been hit with unrest over pay and working conditions culminating in a series of strikes over the past months initiated by Germany's powerful Verdi union.

But not all workers joined the industrial action. Many fear that strikes causing disruption could prompt Amazon to move distribution centres across the border to Poland, leaving them without work.

Heiner Reimann from Verdi Hesse has criticized the movement for "dividing the workforce" and has questioned whether Amazon itself may have initiated the t-shirt campaign to save face. "There's the question of who's behind this campaign," he told the paper.

"We know from our colleagues that there was pressure there," national Verdi spokeswoman Martina Sönnichsen told the paper, further suggesting that Amazon managers had stood by while signatures were collected.

Sandra Münch, who said she had collected 720 signatures in Leipzig and 280 in Bad Hersfeld, denied the accusation that pressure for the campaign came from her employers.

"Certainly not. It was all our own campaign," she said.

Meanwhile an Amazon spokesman has greeted the anti-strike movement:

"We welcome the campaign because it shows how the majority of our workers think – that they have fair and good working conditions in the distribution centres," he said.