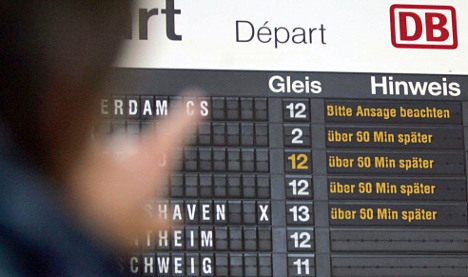 Complaints to Deutsche Bahn were up by almost 40 percent. Photo: DPA

The number of applications made to the German Conciliation Body for Public Transport (Söp) was up by around 50 percent to 3,257, the Süddeutsche Zeitung reported on Monday

Söp’s general manager Heinz Klewe said: “The complaints are predominantly about Deutsche Bahn which is not surprising as they have the biggest market share.”

Almost half of the applications for recompense were due to late or cancelled trains, while problems with tickets prompted a third of all grievances from passengers.

A quarter of complainants were unhappy with the service, be it first class carriages being unavailable or a lack of facilities for disabled people.

The number of applications to the Söp was up from 2,112 last year, but the vast majority of cases were resolved, according to Klewe.

"Well over 80 percent of our settlement proposals were accepted by both the traveller and by the transport company,” he said.

A record number of compensation claims were also made directly to Deutsche Bahn who received 1,250,000 in 2013, up from 900,000 the year before. A Deutsche Bahn spokesman said 90 percent of cases would be decided in favour of the customer.

The train company blamed the huge number of problems on the bad weather, floods and cable thefts which closed stretches of tracks for months.