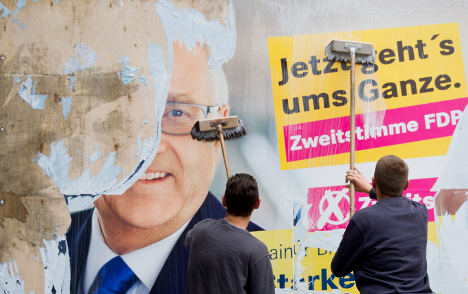 An FDP election poster is scrubbed off a billboard - the Free Democrats were ejected from parliament this year. Photo: DPA

Angela Merkel's government took some flak in February when education minister Annette Schavan was stripped of her doctorate for plagiarizing part of her thesis. Schavan, who had been one of Merkel's closer allies in government, was the second cabinet member to be pushed out of office after being found to have plagiarized part of their degree. Ex-defence minister Karl-Theodor zu Guttenberg suffered the same fate back in 2011.

Defence minister and close CDU colleague of Merkel, Thomas de Maizière was faced widespread criticism in June for failing to act earlier on a drone-building project which had to be scrapped at the last minute at a cost of over €500 million. The minister had often been tipped as a successor to the Chancellor, but most saw the drone "debacle" as scuppering his chances.

On September 22nd, it was Angela Merkel's Christian Union bloc which came out celebrating, and a triumphant yet characteristically sober Merkel thanked voters for putting her back in office for a third term. Whilst they finished shy of an absolute majority, the chancellor's party came out firmly on top – but their Free Democratic Party (FDP) allies were swept out of parliament.

The biggest losers in 2013's general election were the business-friendly FDP, who for the first time since 1949 won less than five percent of the vote and were thus unable to claim any seats in parliament. Since their disastrous election performance, most of the party's senior officials, including leader Philipp Rösler, have quit.

The socialists, Die Linke, rivalled the victorious CDU in their election-night jubilation as the left-wing party celebrated both the demise of their economic enemies the pro-business FDP and their own victory over the environmentalist Greens to become Germany's third-largest party. Both the centre-left SPD and Greens have described Die Linke as too extreme to cooperate with in government. But with the black-red (CDU and SPD) "grand coalition" set to lead Germany for the next four years, Gregor Gysi's socialist faction will be the country's main opposition party.

The growing global controversy over cyber-surveillance projects by the US National Security Agency (NSA) and other national intelligence agencies came to a head in Germany when it emerged in late October the NSA had tapped the mobile phone of Chancellor Angela Merkel. The development led to dramatic scenes in the capital, with Merkel summoning the US ambassador as well as giving President Obama a dressing down. Later allegations surfaced that the US embassy housed a "spy station" from which it monitored the German government as well as other embassies.

November saw the beginning of ex-President Christian Wulff's trial. The 54-year-old stepped down as Germany's head of state last February, bowing to public pressure on him to resign after revelations about alleged misuse of his position for favours. Since Wulff was Angela Merkel's own golden boy and an unorthodox candidate, his troubled presidency and dishonourable discharge were expected to reflect badly on the Chancellor – but if they did, it was not enough to derail Merkel's re-election.

In December President Joachim Gauck announced he would not be attending the winter Olympics at Sochi in Russia next February. Gauck, who had previously criticized the Russian government on several occasions, is presumed to have boycotted the games as a statement against the country's highly controversial law banning "pro-homosexual propaganda."

After weeks of deliberation, with scheduled talks coming and going without agreement and speculation that Merkel's CDU could go in for an unprecedented coalition with the Greens, the agreement for a "grand coalition" between Union and SPD was finally signed on November 27th. But SPD leader Sigmar Gabriel still faced with the challenge of getting his own party to green-light the contract of compromises which would bring them into government.

Sunday December 15th brought news that, with the SPD party vote confirming the leaders' coalition plans, the line-up for Merkel's new "super-cabinet" could finally be unveiled. SPD leader Sigmar Gabriel was named vice-chancellor and CDU heavyweight Wolfgang Schäuble stayed put as finance minister. But there were a few surprises as Germany's two opposing main parties prepare to govern together for the first time since 2009.