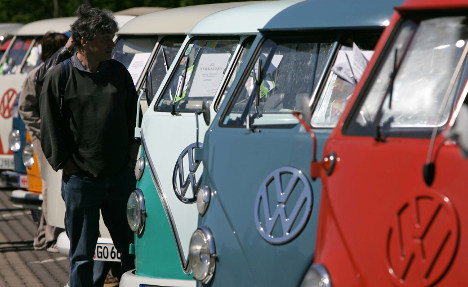 Volkswagen's last Type 2 – the van's official name – is scheduled to roll off the production line in Sao Bernardo do Campo, Brazil on Friday December 20th, closing a 63-year-long chapter of automotive history.

The camper van’s legacy is almost as impressive as that of the Beetle. The worldwide popularity of both vehicles helped VW become a global carmaker.

It was the Beetle – the Type 1 – that gave birth to the company that is currently the world's third-biggest car manufacturer.

Click here to see pictures of the iconic car from down the years.

And it enjoyed various guises over its 60-plus years before finally being pulled from production in 2003.

Introduced in 1934, the Beetle was thought up by Adolf Hitler who wanted to make a reasonably priced car – at around 1,000 Reichsmark – which would be available to all Germans.

And from the functional "People's Car" of the Nazis, it went on to become a symbol of the German post-war economic miracle, an emblem of the hippie "flower power" generation, and even the star of Walt Disney's "Herbie" comedy adventure movies.

The Type 2 – which has the same rear engine and axles as the Beetle -started life as a doodle by Dutch car salesman Ben Pon. Pon, who was VW's first car dealer outside Germany, did the drawing on a visit to the carmaker's plant in Wolfsburg in 1947.

VW finally agreed to put it into series production in March 1950.

German auto industry expert Ferdinand Dudenhöffer says the success of the camper van – known as the "Bulli" in Germany – is closely linked to the country's economic miracle of the 1950s.

Icon of the hippie generation

"Workmen needed a low-cost utility vehicle," he said. And it cemented VW's reputation as a maker of "people's cars", Dudenhöffer said.

And then it went on to conquer the world as a cultural icon of the hippie generation in the 1960s and 1970s, adorning the album covers of the likes of Bob Dylan.

The camper van's robustness, its low price and the ease of its repair has won it a loyal fan base despite its lack of comfort and relatively slow speed.

But just as the free spirits of the hippie era have settled down and grown beer bellies, so too the camper van's star has been waning for many years.

VW ceased building the 1967 version of the Type 2 in Germany in 1979, then in South Africa and Mexico, until Brazil was the last remaining assembly site, exporting to the rest of Latin America.

But in Brazil, too, ever-stricter pollution and safety regulations that will come into effect next year have sealed its fate.

Following the announcement earlier this year to finally halt production, VW launched a special edition, costing 85,000 reais or around €27,000.

Interest was such that the carmaker agreed to double the production of the limited edition vehicles to 1,200, all destined exclusively for the Brazilian market.

But despite its demise, the camper van's legend will live on, and it is etched into the collective memory by its appearances in the Scooby-Doo TV series and more recently in the film "Little Miss Sunshine".

There are venues abound where fans can swap information and repair tips or buy and sell memorabilia, from key rings to tents.