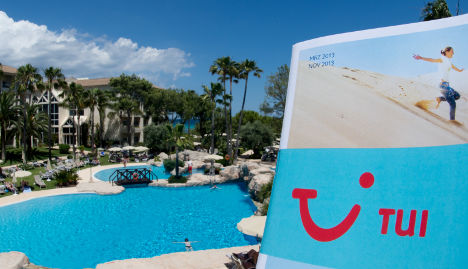 The business year 2012-13, which in Tui's accounting system ended in September, showed a surplus of €4.3 million, compared to a deficit of €15.1 million in the year before, the company said on Wednesday.

Analysts asked for their forecasts by Reuters journalists had predicted a loss of €27.4 million, the Handelsblatt business newspaper reported.

But strong demand for exclusive holidays, the sale of a hotel, and less loss from the Hapag-Lloyd container shipping subsidiary fed into strong figures from British and German holidaymakers to turn the numbers around.

Shareholders will get a dividend of 15 cents per share – the first time dividends have been paid since 2007. Then the payment was 25 cent a share.

Tui's CEO Friedrich Joussen, only moved from telecoms firm Vodafone early this year to head up the holiday giant – not only Germany's but Europe's biggest tourism group. He has been restructuring Tui, to reduce costs and try to make the company sharp enough to take on internet-based rivals.

But that restructuring added €57 million to costs last year, the Handelsblatt said.

The major problem facing Tui lies in the fact that its travel business is almost completely concentrated on one market – the UK. Tui Travel in the UK provides more than 95 percent of the group's turnover. Last year the turnover reached €18.5 billion.