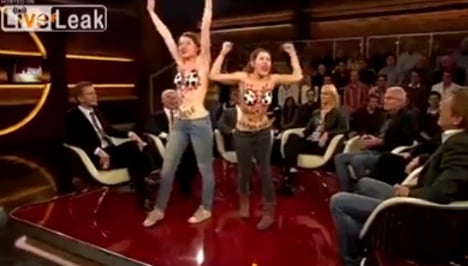 The Femen activists ran onto the stage in the middle of a live football debate on public broadcaster ZDF during the Markus Lanz talkshow.

The 2022 World Cup is due to be held in the Gulf emirate, but the decision attracted controversy as soon as it was announced by football’s world governing body FIFA in 2010.

Footballs with blood around the edges were painted on the women’s breasts and one had “Blut und Spiele” (Blood and games) written on her body. Another had "don't play with human rights" written in English across her stomach.

Two men, who were also part of the protest, held banners in the background.

One of the women was tackled by bodyguards but talkshow host Markus Lanz intervened, telling the security men to not throw them out.

She then returned to the stage and Lanz interviewed one of the men who said they were protesting against the “slavery” of workers in Qatar.

To applause from the audience, he said FIFA should put pressure on Qatar to improve working conditions.