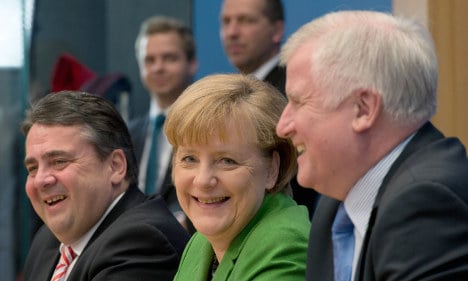 SPD leader Sigmar Gabriel (l), Chancellor Merkel, and CSU leader Horst Seehofer (r) are waiting on the results of the postal vote. Photo: DPA
Social Democrats (SPD) party members have until Thursday midnight to post their votes to approve or reject the deal for a "grand coalition" government between Chancellor Angela Merkel's conservatives and the centre-left SPD.
The SPD is set to reveal the results of the postal ballot of its 470,000 members on Saturday in Berlin.
But thousands of votes sent so far are invalid because the declaration on them has either been filled out incorrectly or not at all by the party member.

Welt Online reported on Thursday that 30,000 of the 300,000 votes sent so far will not be counted because of this reason, citing SPD sources.

Merkel is keen to end the longest coalition wrangling in German post-war history and put into action the accord hammered out with the SPD late last month.
"We needed three months to form this government," Merkel told members of her conservative Christian Democratic Union Monday before they rubber-stamped the coalition deal.
"Now it is finally time to get to work." Approval by the SPD is expected, while rejection would likely trigger new elections, topple the party's leadership and produce more months of political uncertainty.
If the party members give their blessing, the members of Merkel's next cabinet are expected to be unveiled Sunday.
Finance Minister Wolfgang Schäuble, one of the main architects of Germany's tough-love response to the eurozone crisis, is widely expected to stay in place, as is Defence Minister Thomas de Maizière, a close Merkel confidant.
Fellow veteran politician Frank-Walter Steinmeier of the SPD is tipped to return to the foreign ministry, where he served during Merkel's first term from 2005-2009.
These finishing touches would clear the way to Merkel's swearing-in before the Bundestag lower house of parliament on Tuesday for a third term.
'To form a coalition with such a person is extremely dangerous'
Merkel and her CDU triumphed in September elections, winning 41.5 percent of the vote on the back of a strong economy, falling just short of what would have been an extraordinary absolute majority.
The Social Democrats, a 150-year-old force in German politics, limped to second place with 25.7 percent in their second worst result since World War II.
However they were able to drive a hard bargain in the coalition negotiations, in part due to the threat that its 475,000 members could torpedo the deal if they were not satisfied.
SPD leader Sigmar Gabriel is set to become Merkel's vice chancellor and possibly head up a super-ministry in charge of the economy as well as Germany's ambitious energy transformation away from nuclear power and toward renewables.
He said he was pleased with the brisk turnout for the unprecedented members' vote to determine the fate of the coalition, calling it a "major boost for the SPD" on his Facebook page.
Political scientist Jens Walther of the University of Duesseldorf said he expected a solid majority to vote "yes" but that the coalition was fraught with risk for the SPD, noting that their last tie-up proved disastrous for the party at the polls because Merkel claimed credit for successes and co-opted centre-left ideas.
"She can lean to the left or the right, whatever the voter wants. To form a coalition with such a person is extremely dangerous. They have to develop a strategy to deal with Merkel," he said.
Gabriel and his negotiating team managed to force Merkel's conservatives to make a number of concessions including creating a national minimum wage of €8.50 euros per hour and allowing dual citizenship for the children of immigrants.
Three months of German politics in suspended animation, not to mention the length of the election campaign, have created a surreal atmosphere in Berlin, with official visits grinding to a near halt and key decisions shelved.
A stop-gap committee in parliament and a cabinet of outgoing "zombie" ministers have prevented total paralysis, allowing for example diplomacy in response to political turmoil in Ukraine and negotiations on a European banking union to progress.
But weekly newspaper Die Zeit noted that many politicians were aware that "when the public sees rows of empty seats the impression is conveyed of an absentee or even lazy political elite".
Walther predicted a stable "grand coalition" government that would serve out its term.
"Germans like compromise and harmony so it will be very popular," he said.
READ MORE: Why the coalition deal matters to non-Germans