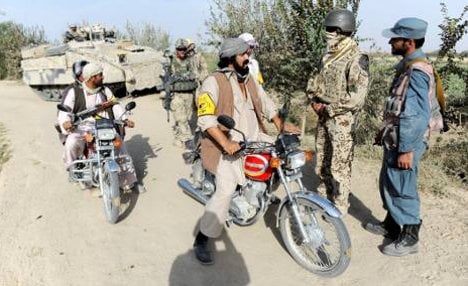 Hashmat Nawabi was granted refugee status by German immigration authorities at the end of last week, after they accepted his life was under threat in Afghanistan from the Taliban because of the work he had carried out for British forces.

It means he will be able to stay in Germany indefinitely and leave the refugee camp outside Frankfurt where he has stayed for a year if he can afford to, to seek work.

But Nawabi is continuing his legal fight at the High Court in London against the UK Government, where his lawyer is challenging current UK policy on Afghan interpreters.

The 26-year-old, who has been in Germany for a year since being abandoned by people smugglers, told The Local: "The last year has been a very tough time for me. I used to be an interpreter and now I'm a toilet cleaner."

He is furious and disappointed at his fate – stuck in the camp, unable to speak German and hobbled by tight restrictions on what asylum-seekers can and cannot do. His anger is directed towards the British.

"They had no sympathy for us, they just closed my chapter. The government is just closing its door on me. I'm now looking to get back on my feet. When I needed help they turned their back on me. I was counting on the British.

"They are the ones who put me in this situation, they were the hope I had, but people just closed their door."

He had begged for help earlier this year in a letter to Prime Minister David Cameron.

"I had to make this decision [to leave Afghanistan] to save myself and my family from the death threats, all because I was working for British Forces," he wrote, according to a report in the British Times newspaper.

"My family and their neighbours have been threatened with beheading if they helped me; my own father was forced to ask me to disappear to save the family from death."

He said he had moved his family to try to get them out of danger, and that his fiancé's family considered his work with the British military to put her at such risk that they broke off the engagement.

"They warned our neighbours to inform my family whenever they show up, especially myself, they are going to execute me according to the Islamic rules. They also warned people that whoever tried to help them that they will be beheaded too."

A spokesman for the Ministry of Defence (MoD) told The Local he was unable to comment on individual cases but denied that Afghan interpreters had been let down.

The British Government has offered interpreters who stay in Afghanistan money as well as training. Others have qualified for resettlement in the UK. It is understood that British officials gave Nawabi $17,000 after he finished working for the military.

But Lord Ashdown, a former Royal Marine, told The Times on Tuesday that the offer was “absolutely shameful”.

The paper said that 27 interpreters had died serving with British forces in Afghanistan.

In October Germany said it would give asylum to 150 interpreters who helped its troops in the Kunduz region of Afghanistan.

The decision came after growing evidence that the Taliban was targeting interpreters who helped NATO troops.