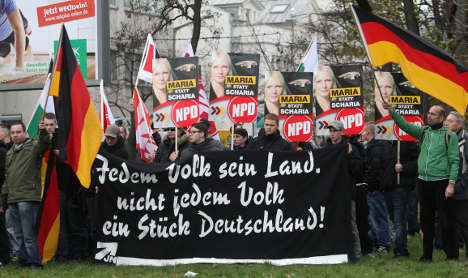 NPD members demonstrate in Leipzig last month. The banner reads 'Their own country for all peoples, not a piece of Germany for every people'. Photo: Sebastian Willnow/DPA

The states – represented in the upper house of parliament, the Bundesrat – are due to submit their application for a ban to the Constitutional Court in Karlsruhe on Tuesday.

It is the second attempt to ban the NPD (National Democratic Party of Germany), after the same court rejected a submission in 2003, because too much of the crucial evidence was from party members who were acting as paid agents of the security services.

That attempt was backed by the government and Bundestag, the lower house of parliament, as well as the Bundesrat. This time the Bundesrat is going it alone, after the other two bodies decided a second attempt was unlikely to succeed.

This time around, the submission consists only of publicly available evidence, the Frankfurter Allgemeine Zeitung (FAZ) newspaper reported – as well as two reports from academics.

One of these talks of a "continuity in ideological direction" from historical National Socialism to the NPD. A second says that the actions of the NPD have "already led to the limitation of public democratic life at the local level."

The NPD last got 0.8 percent of the vote in Lower Saxony's state election, 1.2 percent in Bavaria and 1.1 percent in Hesse, while in September's federal election they managed 1.3 percent. They have a total of 13 state MPs in Saxony and Mecklenburg-Western Pomerania.

The submission to ban the party claims the NPD wants to violently deport foreigners and migrants, as well as those who have German citizenship but do not met their narrow definition of being German enough.

It also argues that the NPD's, "rejection of the democratic parliamentary system of government, its relativism of National Socialist injustice and the relativism of the state's monopoly on the legitimate use of force" counted as breaches of the basic order of peaceful democracy.

The FAZ also said that a security service report included in the submission suggested that one in four of the NPD's leadership nationally and in states, had criminal records for offences including assault, criminal damage, trespassing, and propaganda-related offences. Half of those convicted were, according to the report, habitual offenders and had been given prison sentences for their crimes.

The Bundestag decided to make the submission a year ago in the wake of the National Socialist Underground (NSU) case, in which a neo-Nazi gang, which had some connections to NPD functionaries, are accused of killing ten people over a period of seven years.

READ MORE: 'Only a neo-Nazi ban will force the police to act'