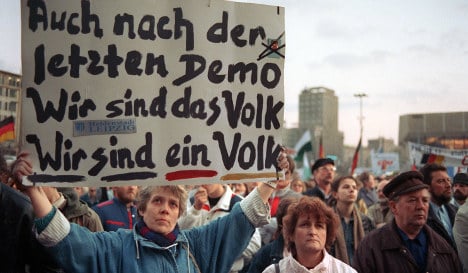 Even after the fall of the East German government - here in 1990 - the phrase had power. Photo: Frank Kleefeldt /DPA

'Wir sind das Volk' – we are the people – became the rally cry for demonstrators who defiantly faced down the East German government by calling for more democracy and freedom to travel.

It came to represent the entire concept of reclaiming the authority to act on behalf of the population from the government that had lost all legitimacy to do so, and has since been used in many different causes where people do not feel represented by the government.

The city of Leipzig held the rights to the phrase, but this May a group of fascists registered the name 'Wir sind das Volk WSDV' as its name and registered the phrase at the Munich patent and trademark office.

Hans Müller and Wilfried-Hassan Siebert, from Schleswig-Holstein, claimed the phrase for their new, far-right party which supposedly wants to stop what they say is the continued occupation of Germany – and to stop all immigration to the country.

But Leipzig won a ruling, which was published on Wednesday, from the patent office that the two phrases are too similar, and that the group must ditch their version.

"Now it is clear that this decisive phrase belongs to those who brought it to the world – the people," said Leipzig mayor Burkhard Jung following the ruling.