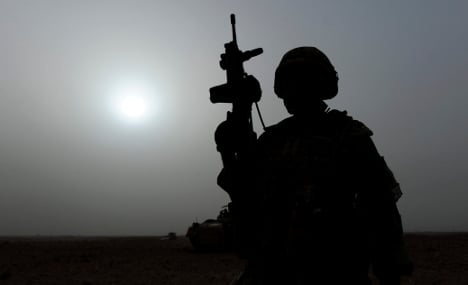 Researchers at Dresden's University of Technology described “manifest but largely unrecognized” illnesses including depression and Post-Traumatic Stress Disorder (PTSD) affecting a fifth of troops before they went into duty.

And on their return, the soldiers had a four to six times greater risk of developing further mental health problems, Hans-Ulrich Wittchen from the university’s Institute of Clinical Psychology and Psychotherapy told the Süddeutsche newspaper.

The German parliament commissioned the study in 2008 to see how many cases of PTSD were undiagnosed in the military. It showed the problem remained hidden as soldiers feared being stigmatized if they admit to having difficulties.

Troops also thought it would hurt their career if they told colleagues or superiors they were suffering from mental strain, the Süddeutsche said.

Researchers tested 2,500 soldiers, some of whom had served abroad and some of whom had not. They also interviewed 621 soldiers before they went to Afghanistan and then again a year after their return.

Wittchen said those soldiers who had mental health issues before they served abroad were four to six times more likely to have difficulty coping afterwards. The study called for better diagnosis and support for troops returning from duty.

The Parliamentary Commissioner for the Armed Forces, Hellmut Königshaus, said: “Only mentally healthy soldiers should go into action.”

He told the Süddeutsche it was not acceptable for a fifth of serving soldiers to have psychological problems.

The Defence Ministry said it had launched a pilot project to develop psychological screening methods to detect pre-existing stress disorders before soldiers took part in operations.

Mental health conditions among soldiers have also been getting more attention from other countries whose forces served in Afghanistan.

In the UK, 11,000 of its 177,000 serving members of the military have been diagnosed with mental conditions including post-traumatic stress disorder, the Sunday Telegraph reported in March.

Meanwhile in the US more than 14,031 soldiers deployed and 2,376 who were not deployed were diagnosed with PTSD according to figures from December 2012 from the Congressional Research Service.