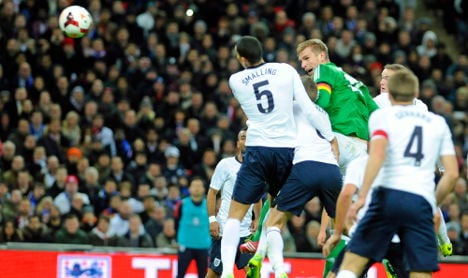 Per Mertesacker rises above the English defence to score at Wembley on Tuesday night. Photo: DPA

Their 1-0 victory in a friendly match, to mark 150 years of the English Football Association, extended their unbeaten run at Wembley to almost four decades.

Despite making eight changes from the starting line-up which drew with Italy in their last match, the Germans still managed to control the game – a fact not unnoticed by German commentators.

The Hamburger Morgenpost declared the win a "home victory in our front room," as the Germans have become so comfortable playing at Wembley over the years.

"Wembley has long been the Germans secret front room," it wrote.

Under a headline stating, “always good enough for England,” the Bild newspaper bragged, “it was hardly world class but 1-0 at Wembley! The English have not been able to beat us at their home for 38 years.”

The Welt newspaper said coach Joachim Löw’s experimental line-up should be happy with the result and noted goalkeeper Roman Weidenfeller, who was making his debut, had very little to do.

The Süddeutsche newspaper, meanwhile, described goal scorer Per Mertesacker, who secured the win with a header, as the “Tower of London”.