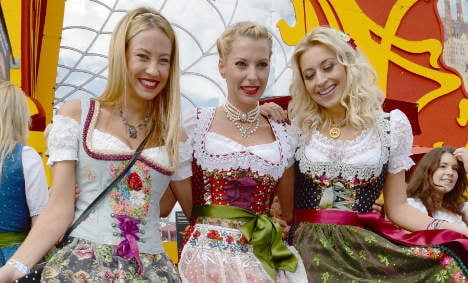 The Bavarian accent has come out at number one in a survey of Germany's sexiest accents. Photo: DPA

According to the survey by dating site FriendScout24, speaking a regional dialect is no bad thing – in fact most Germans find it attractive, the Merkur newspaper reported.

Almost all age groups agreed that dialects are a turn-on and 84 percent of those aged over 19 said they were drawn to regional accents and dialects. The 14 to 19-year-old age bracket was the only exception with 45 percent finding dialects generally unattractive.

But some regional dialects are considered sexier than others. Bavarian topped the list with 26 percent of votes, followed by Austrian and North German, both with 17 percent, and the Köln dialect, 'Kölsch', with 15 percent.

In line with regional stereotypes, the Saxon dialect was predictably unpopular and only 5.6 percent found it "particularly attractive".

But 'Pfälzisch' from the region of Rheinland-Pfalz on the French border was considered the least attractive, receiving only 3.7 percent of votes.

A major reason for the Bavarian dialect's success in the poll was its popularity among Bavarians, Munich-based Merkur reported.

Over 62 percent of those surveyed in the region ranked Bavarian as a "particularly attractive" dialect, whereas Germans from other regions were less fond of their own sound.

In Hesse and Saxony, for example, only 25 percent believed their own accent to be attractive.

One thousand Germans were surveyed for the poll. Here are the results: