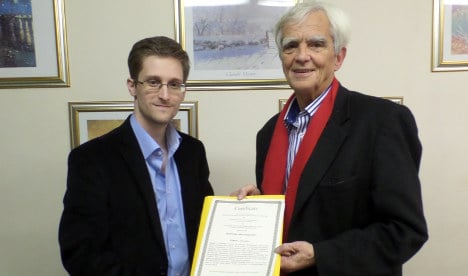 Snowden was given a whistleblower prize at the end of October in Moscow by German Green MP Hans Ströbele Photo: DPA

The University of Rostock wants to give the former security contractor the doctorate after he leaked thousands of confidential documents exposing a mass spying programme which have embarrassed the US National Security Agency (NSA) as well as the UK’s security services.

The dean of the university’s philosophy department, Hans Jürgen Wensierski, said: “We owe it to Snowden to not forget him while he is in Moscow when he has dedicated himself to exposing truth,” the Berliner Zeitung reported.

He added: “We are impressed with the civic courage and civil disobedience of Mr Snowden. Moral courage is a central theme in research and teaching of the social sciences and humanities.”

Wensierski said civil disobedience such as that shown by Snowden was an important part of modern democracy. "Think about Rosa Parks in the 1950s, Martin Luther King, Nelson Mandela or Mahatma Gandhi – all citizens who infringed states’ laws in the service of the greater good.”

The dean has applied along with two colleagues for Snowden to receive the honorary doctorate and the application is now being looked at by the university.

In the past the honorary doctorate from the university on the Baltic coast has been given to Albert Einstein and Germany’s current president Joachim Gauck.