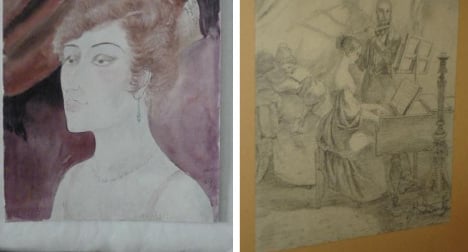 Otto Dix's Dame in der Loge (l) and Carl Spitzweg's Das Klavierspiel were among the 25 works whose names were released. Photo: DPA

Under mounting pressure, authorities released the names of 25 of the 1,400 artworks found in a Munich flat belonging to Cornelius Gurlitt , the son of a Nazi art dealer.

They put the list on website www.lostart.de – a government funded site based in Magdeburg – which soon crashed after the announcement. More names are expected to follow.

A taskforce has also been formed to research the works and trace their ownership. It is being led by Ingeborg Berggreen-Merkel, a former Bavarian minister and lawyer.

The Nazis seized hundreds of thousands of works from Jewish collectors. Gurlitt’s father, Hildebrand Gurlitt, who bought and sold art for the Nazis. It is believed his son inherited the collection, which he kept in the flat for decades.

-Conrad Felixmüller, “Couple in a Landscape,” 1924