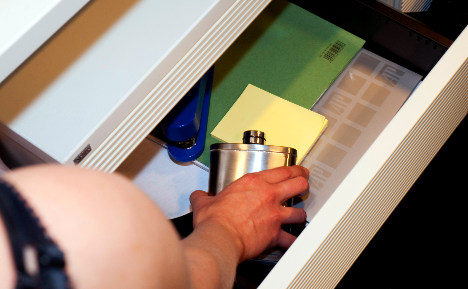 Alcoholism rates in Germany have levelled off but recovering alcoholics have a hard time in the world of work. Photo: DPA

"These people are the most reliable employees you could hope for," said Weibke Schneider, chairwoman of the Templars, arguing for an employment quota.

She said there was no good reason for employers to not employ abstinent recovering alcoholics. Relapses were rare, she added, and prognoses better than with other "chronic diseases."

Dealing with addicted employees should be a matter for bosses, Schneider said. But "bosses shouldn't turn into amateur psychotherapists," she added, saying that there were many good textbooks for dealing with alcoholics in the workplace.

Raphael Gaßmann of the Central Office for Addiction Issues said in Düsseldorf on Monday that a trend of moving away from the culture of drinking at work and towards addiction prevention had caught on in most large companies.

The previous gradual increase in alcoholism in Germany had stopped, he said – and drinking in general had even gone down a little. Only a few small and medium businesses were lagging behind the norm.

Work could on the one hand, have a stabilizing effect for alcoholics, Gaßmann said, but on the other, the stress and pressure of a working environment could also heighten the risk of addiction.

It is thought that 1.3 million working-age people in Germany are currently addicted to alcohol.

Figures from state health insurance firms show incapacity to work due to alcohol costs the economy €1.5 billion each year, while the indirect cost is thought to be €16.6 billion a year.

Experts on the integration of addicts into the workplace are engaging in a nationwide conference on the subject until Wednesday in Hessen, in central Germany.