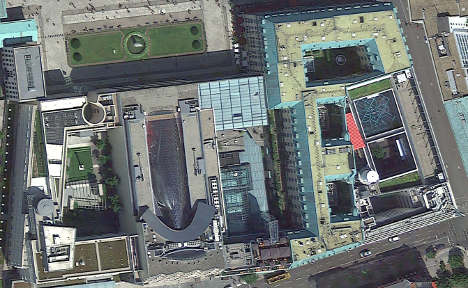 Aerial picture of the UK embassy on the right, with white cylindrical structure visible on the roof. Photo: DPA

The allegations, made by the Independent newspaper citing US spy data leaked by whistleblower Edward Snowden, will do nothing for relations within the European Union.

German relations with the US have been damaged by revelations that the National Security Agency was not only gathering internet-based data wholesale from around the world, but also allegedly operating a listening post from on top of its new embassy in Berlin.

The Independent reported on Tuesday that this "intercept nest" had been hastily shut down in the wake of revelations that it had been listening to calls made by Chancellor Angela Merkel on her mobile phone.

Now focus has swung to the British embassy just a couple of blocks down the road.

"The NSA documents, with aerial photographs and information about past spying activities in Germany, suggest that Britain is operating its own covert listening station within a stone's throw of the Bundestag, Germany's parliament, and Ms Merkel's offices in the Chancellery, using hi-tech equipment house on the embassy roof," the Independent said.

It said aerial photos showed what it called a potential eavesdropping base "enclosed inside a white, cylindrical tent-like structure" which could not be seen from street level. It had been there since the embassy was opened in 2000.

The structure was similar to the now-derelict Teufelsberg listening post operated by the allies in West Berlin during the Cold War.

"Equipment within the embassy unit would be capable of intercepting mobile phone calls, wi-fi data and long-distance communications across the German capital, including the adjacent government buildings such as the Reichstag and the Chancellery clustered around the Brandenburg Gate," the paper said.

It said the allegation was "potentially toxic" and quoted Green MEP Jan Albrecht saying, "If GCHQ runs a listening post on the top of the UK's Berlin embassy, it is clearly targeting politicians and journalists. Do these people pose a threat?"

British Prime Minister David Cameron's spokesman declined to comment to the paper. The British embassy in Berlin could not immediately be reached.