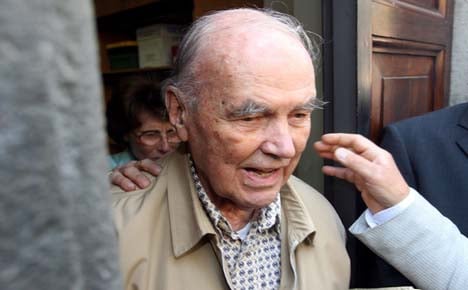 Tomas Erick Ramon Priebke Ortiz, 23, told the press in Bariloche, the southern Argentine city where he lives, that the Priebke name is a hurtful label, according to an interview that came out Friday.

"Why carry a last name that does me bad because it did harm to people? It doesn't make sense. It's a label that has nothing to do with me," he said in an exclusive interview with news agency ANBariloche.

The city, a picturesque resort town at the foot of the Andes some 1,800 kilometers (1,120 miles) southwest of Buenos Aires, was also home to the elder Priebke, a former Nazi official who took refuge and lived there for 40 years until he was extradited to Italy in 1995 over a World War II massacre.

The grandson hired an attorney to begin the process of removing the Priebke name so as to "part with so much pain and bring closure to this story."

The 100-year-old Priebke died two weeks ago while living under house arrest in Rome for his role in the massacre of 335 people — almost all of them innocent civilians — in the Ardeatine complex of caves near Rome in 1944.

The Nazi was unrepentant to the end, and his grandson had no contact with him after he was extradited then sentenced to life in prison three years later.

"When my grandfather died, I thought I would feel a little more peace, that I would get a break from so much pain, but the truth is not really," said Tomas Priebke Ortiz, who has not seen his father Jorge Priebke for two years since his parents separated.

"I don't identify with that name. I don't have much connection with my (paternal) family nor with my dad," he said.

In the video interview, Tomas Priebke Ortiz said that what triggered his decision was the response his father gave when a reporter asked about the elderly Priebke's burial after Germany, Italy and Argentina responded unfavorably to receiving the body.

"My old man said they could take his body anywhere, to Israel. I'm not ok with continuing to hurt people; it would have been wiser to say nothing," he said.

According to the 23-year-old, the reporter also described his father as loyal to Nazi ideology, which "fell very heavy. I don't want to be associated for even a moment" with that sort of thinking, he said.