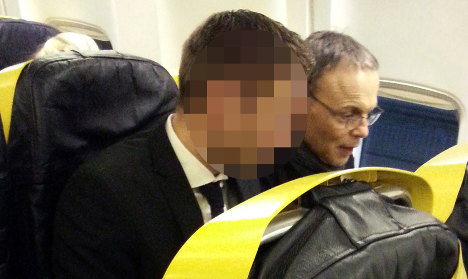 Photo: DPA. The bishop (r) on the Ryanair flight.

The Bishop of Limburg, Franz-Peter Tebartz-van Elst, has splashed out €15,000 on a bath tub, €738,000 on a garden and €25,000 on a conference table at his new residence in western Germany, angering the public and press and attracting the attention of Pope Francis.

And Chancellor Angela Merkel has also entered the debate over the controversial bishop.

Speaking in Berlin on Monday, her spokesman Steffen Seibert described the affair as a “great strain” on the Catholic Church. He added that he hoped the Vatican would find a solution for the good of Catholics.

Pope Francis has brought a more modest style of leadership to the Catholic Church, calling for a “poor Church for the poor”. But the bishop’s extravagance has brought criticism from all corners that the church is out of touch.

On Sunday he showed that he too could forgo luxury when he boarded the 6.35am Ryanair flight from Frankfurt-Hahn airport to Rome where his future will be decided, the Bild newspaper reported.

He will have to explain how he has spent €31 million of church money on his headquarters next to Limburg cathedral when the original estimate was €3 million. According to newspaper the Welt am Sonntag the costs could be even higher, reaching €40 million.

He will meet the head of the Catholic Church in Germany, Archbishop Robert Zollitsch while in Rome. Zollitsch criticized the bishop and said he would also meet the pope this week to discuss the scandal, saying it should not remain “without consequences”.

“This weighs on us,” Zollitsch told reporters. He added that the bishop should respond “with a spirit of self-critcism”.

The financial committee of the diocese claims their members were left in the dark about the spending in Limburg. Costs on the residence escalated as churches closed in the area.

The chairman of the administrative council in one parish in the bishop’s diocese, Benno Hofmann, told the Welt am Sonntag the bishop was “living 300 years too late”. “Our bishop has no sense that what he has done is wrong,” he said.

The 53 year-old is also accused of lying under oath and taking first class fights to visit the poor in India last year.

A statement from the diocese said: “The bishop has made it clear that any decision about his service as a bishop lies in the hands of the Holy Father [Pope Francis].

“The bishop is saddened by the escalation of the current discussion. He sees and regrets that many believers are suffering under the current situation.”