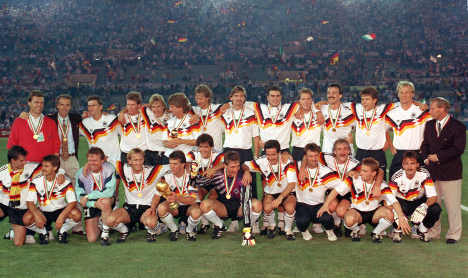 Suffering only two defeats in 82 World Cup qualifier matches, Germany knows what it takes to reach the finals of international football’s biggest tournament. With an average of 2.49 points per game, their record is formidable – they have never failed to qualify.

One of the rare occasions that Germany did slip up was against England in 2001. A Michael Owen hat-trick helped the English to a famous 5-1 victory in Munich. But despite inflated expectations for the Korea-Japan World Cup England went out in the quarter-finals – again.

England rarely makes life easy. Eleven defeats from 100 qualifiers and a failure to qualify for three World Cups, does not tell the full story of the stress endured by England fans down the years.

Commentators in the German media have suggested that chopping and changing in England’s management is a major reason they have struggled in the past.

“England have changed their coach more than Germany over the past 30 years, with different philosophies, ideas and systems being tested. Germany have had more consistency. This is a huge factor,” one German sports journalist told The Local.

“Germany also have a very strong home record and they take qualifiers very seriously,” he added. “They never underestimate their opposition, whereas the same cannot always be said for England”.

This time round Germany’s road to qualification has been relatively straightforward, with Joachim Löw’s side sitting comfortably at the top of Group C. They are five points clear of second-placed Sweden.

Germany’s only major set-back came against Sweden when the Scandinavians fought back from 4-0 down with half an hour to claim a 4-4 draw.

Germany face the Republic of Ireland and Sweden in their remaining qualifying matches, needing only two points to book their place in next year’s tournament.

“Anything other than automatic qualification against Ireland would be disappointing,” said team manager Oliver Bierhoff. “Despite the injuries, we have to be ambitious enough to dominate the game and win it.”

Once again, qualification for England is far from a given. England are top of their group and their chances of qualifying for Brazil next year are in their own hands. But they need two wins from two matches to ensure qualification. The first game is against Montenegro on Friday and the second on Tuesday when they take on Poland.

Just one point clear of the Ukraine and Montenegro, Friday’s match against Montenegro is a must-win for Roy Hodgson’s side – especially given the fact that Ukraine are all but guaranteed three points against minnows San Marino in their final group match and Montengro face a weak Moldova side.

Memories of tournament qualification failure will still be fresh in the minds of England’s players. “Umbrellagate” in 2007, when Steve McClaren watched on as England failed to qualify for Euro 2008 on a rainy night at Wembley, still haunts captain Steven Gerrard.

In response to accusations that playing for England does not mean enough to the team’s highly-paid players, the Liverpool player said: “The pain and the agony – how long that lasted after we didn’t qualify for Euro 2008 – I wish you could bottle that and show it to people who doubt how much we care.”

The last time England missed out on World Cup qualification in 1993 was an equally bitter pill to swallow. A controversial defeat to the Netherlands in England’s penultimate qualifier ultimately dashed their chances of reaching USA 1994.

To manager Graham Taylor’s outrage Dutch defender Ronald Koeman scored the winner moments after he should have been sent off and Taylor resigned shortly after the final group match.

The closest that Germany have come to missing out on the World Cup finals was in 1989 when they came from behind to beat Wales when only a victory would do. Thomas Häßler’s second-half volley booked Germany’s place at Italia 90 which they went on to win.

This week Graham Taylor issued a warning to current manager Roy Hodgson of the kind of criticism he may face if he fails to guide England to Brazil.

“If England win it’s thanks to the players, if they don’t it’s the manager’s fault,” Taylor told the Daily Telegraph. “If he doesn’t qualify Roy will have to handle a lot of stuff coming in his direction”, he said.

But England have been up against it before and scraped through. Memories of David Beckham’s last-minute free-kick against Greece in 2001 will give England fans hope – if not complete confidence. German fans will surely feel the assurance that goes with past success.