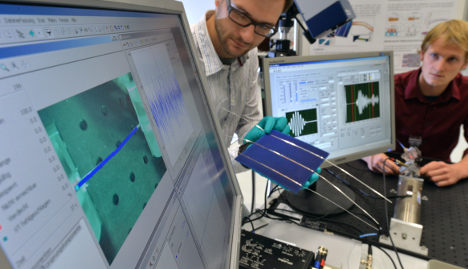 Three-time winner Siemens, the electronics and global engineering giant, headed up Germany's representation on this year's list of top innovators – formed from companies with 100 or more unique inventions in the last three years.

The 166-year-old German multinational conglomerate, which operates across the fields of industry, energy, health care, finance and infrastructure, had a total 11,949 unique inventions between 2010 and 2012, said Thomson Reuters on its award website.

Joining Siemens on the list was German scientific research organization Fraunhofer. Since it was founded in 1949, the society has pushed forward with applied research in health, security, communication, energy and the environment.

The 60 individual institutes across Germany, and seven centres in the United States, were together responsible for 1,520 unique inventions over the past three years.

Relative newcomer Infineon Technologies also made the list for the first time. The company, founded in 1999, has in recent years led the field in semiconductors for industrial and automotive electronics and digital security solutions and has had a total of 1,505 unique inventions since 2010.

Germany, still thought of by many as Europe's main innovative motor, did not shape up so well against other European countries on the list. The country's tiny neighbour Switzerland also counted three winning companies, Sweden two and the Netherlands one.

France, meanwhile, swept the board with a whopping 12 firms making it onto the top list.