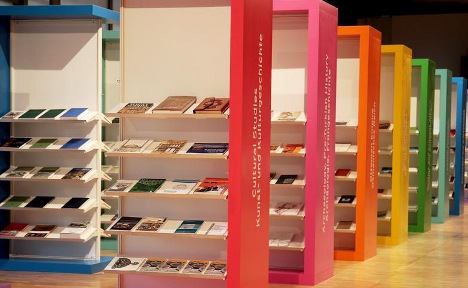 Faced with competition from the online giant, publishers face an “imperative to be big”, organisers of the Frankfurt Book Fair say, pointing to this year’s merger to create Penguin Random House.

But the flipside is that start-ups are springing up as continental Europe now follows in the footsteps of Britain and the US, with all eyes on the newcomers shaping the future and hunting for a viable business model.

“The dividing line is no longer between old and new, print and e-books, analogue and digital,” the fair’s director Jürgen Boos said.

“Instead it runs between those who have a passion for content and who want to provide access to it, and those who don’t really care what they’re selling.”

In Germany, the pioneering spirit is seen in innovations such as Tolino, an e-reader produced by bookshop chains and Deutsche Telekom, and Flipintu, an online reader community sharing tips and recommendations, hoping to do for books what Spotify did for music.

Katja Boehne, the fair’s spokeswoman, said the mushrooming of start-ups in digital publishing mirrored the switch to smartphones in mobile communications.

From initially offering books in digital format, the range of services around books and content now encompasses self-publishing, 3D educational products with interactive graphics, platforms for interactive reading and new ways of Internet shopping, she said.

“The possibilities of buying books in the classic ways of bookselling are becoming constantly smaller,” she said.

“Accordingly, new solutions for the distribution of books on the Internet are being worked on everywhere,” Boehne added.

More than 7,000 exhibitors will descend on the western German city which annually hosts the five-day showcase of international publishing and its cross-over into film, video games and merchandising.

Brazil’s literature, arts and culture will take pride of place, represented by around 90 writers, and backed by a 900,000-euro ($1.2-million) government programme for 2011-13 for the translation of Brazilian works.

The publishing sector is in “relatively good” shape compared to other industries, with children and youth literature a driving force, and school books also doing well, Boos told reporters.

“Parents are investing in their children,” he said.

first part of a trilogy that has been translated into 50 languages and sold over 70 million copies worldwide.

Not only does it pose questions about the diversity of what people read but also drives up the price of translation rights, Boos said.

“Everyone wants a certain bestseller, they all want the next Harry Potter, or the next Fifty Shades of Grey or Dan Brown… everyone’s lusting after it,” he said.

Blurring the lines between reality and fiction in today’s storytelling is another topic for discussion at the fair, where US-Lebanese director, cameraman and author Ziad Doueiri will reveal how he shifts between Hollywood and Lebanon.

Doueiri has worked with director Quentin Tarantino and will receive the fair’s 10,000-euro prize for the Best International Literary Adaptation for his film “The Attack”, based on Yasmina Khadra’s novel about a suicide bombing in Tel Aviv.

Doueiri said in April that the Lebanese authorities had banned his award-winning film from cinemas in his home country because it was partly shot in Tel Aviv using Israeli actors.

The debate about e-books and whether they sound the death knell for print books seems to have been laid to rest, with both finding their place and acceptance in parallel.

Bookstores nevertheless face the need to be inventive.

For hints on how bookshops may look in the future, fair organisers point to initiatives in Britain, such as “The Bookshop Band” which writes literature-inspired songs and plays them in stores.

“Let’s be reasonable and add an eighth day to the week that is devoted exclusively to reading,” enthused one tweet by a fan.