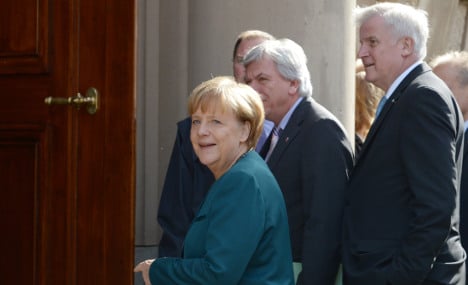 Although Merkel triumphed at the polls, she fell just five seats short of a majority, kicking off a process of coalition haggling and political poker that, smaller parties have warned, could drag on into next year.

On the eve of the talks with the defeated Social Democrats (SPD), Merkel pledged a “fair discussion” and said: “Europe is looking at us and the world is looking at us… We have a shared responsibility to form a stable government.”

None of the delegates spoke as they headed into the crucial talks which started at 11am and took up much of Friday afternoon.

secretary Andrea Nahles after about three hours of closed-door talks with Merkel’s CDU and their Bavarian allies the CSU.

“There was an open-minded atmosphere,” said Nahles. “We found areas of

She said the two parties “identified the big issues” – including finance, infrastructure, labour and education – without going into details, adding that the negotiating partners had agreed not to reveal details as they were building trust.

Both sides have stressed the initial talks are about policies, not trading ministerial posts and SPD party chief Sigmar Gabriel warned against “tactical manoeuvring and willfully protracting negotiations”.

Among the SPD’s key campaign demands were higher taxes for the rich, a national minimum wage, a ceiling on rental increases, and a women’s quota in boardrooms.

For the centre-left party, the second ballot box bruising in a row has sparked bitter internal debate on whether to again govern in popular Merkel’s shadow, as they did in 2005-09, or rebuild the 150-year-old party in opposition.

Should Merkel’s conservatives and the SPD fail to agree on another left-right “grand coalition”, Merkel has a potential, though unlikely, Plan B – to ask the left-leaning Greens to be her junior partners.

Senior CDU figures have stressed to the Greens that they see them as a “real alternative” and not just playing them against the SPD, the Frankfurter Allgemeine Zeitung daily reported.

The rivals met on neutral ground, in a parliamentarians’ club where legislators, after waging battle in the Bundestag, sometimes meet to mend fences quietly over a beer.

A confident CDU/CSU drew a red line this week, with leaders promising “no tax increases”.

Finance Minister Wolfgang Schäuble reiterated on Thursday that opposition to tax rises was the “common clear line of the CDU and the CSU”.

The SPD leadership, having suffered a defeat of 25 percent to the CDU/CSU’s 42 percent at the polls, now faces a tough choice.

Jumping back into bed with the CDU would give them another stab at power and several ministerial posts, but also anger many rank-and-file supporters who would find such an alliance humiliating and damaging.

The party’s 470,000 members would get to vote on whether to accept another “grand coalition”. A ‘no’ vote would likely force the SPD leadership to quit.

Despite the poll defeat, SPD leaders have displayed swagger in their new kingmaker role, warning they are not scared of opposition and threatening to extract a high price if they help Merkel to a third term.

News weekly Der Spiegel said Gabriel knows a grand coalition is unavoidable but “must demonstrate maximum distaste for it” and, in the end, get party members “to support an alliance that they don’t really want”.

If Merkel’s courtship of the SPD nonetheless fails to lead to another loveless marriage, the CDU would have to woo an even more unlikely partner, the Greens.

A conservative alliance would have long seemed unthinkable with the Greens, whose first generation of hippies and peaceniks entered parliament handing out sunflowers.

But in the three decades since, Merkel has adopted the Greens’ core demand of phasing out nuclear power, while the Greens have become the party of many urban middle-class voters.

Merkel’s team is set to meet the Greens next Thursday at 2pm.

“We are entering discussions in a serious spirit,” said the Greens’ Katrin Goering-Eckardt. “We are not saying from the outset that we want nothing to do with the conservatives. But I am very sceptical that we can in fact reach common ground on policies.”

Whatever the talks yield, Merkel’s government can stay in power until it is able to form a new government – for how long is not defined by the German constitution.