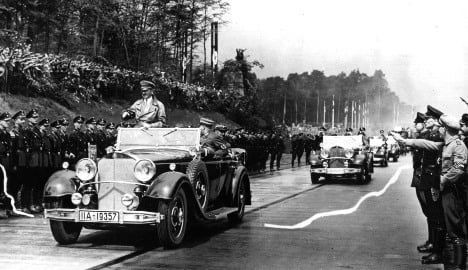 The four-kilometre stretch of road on the A11, north east of Berlin in the state of Brandenburg, dates from 1936 and was part of Hitler’s massive motorway building programme of the Reichsautobahn.

Newspaper the Welt am Sonntag reported that the road survived Nazism and Communism and despite some repair work is still the original stretch from the 1930s.

But drivers have had enough of the cracks and potholes on the route which links Berlin to the Polish city of Szczecin.

Frank Gotzmann, director of the nearby town of Gartz, told the newspaper: “The condition of the motorway is unbearable. Everyone drives carefully on it.”

The road was laid using 25-metre-long concrete slabs. These are too long, said Reinhard Arndt, member of a motorway history club. The slabs are cracking under the weight of the traffic as well as the weather.

But Arndt said the stretch of road was his favourite because of the history and the countryside, the Welt am Sonntag reported.

Renovation is planned for 2015 if the money can be found. Five bridges on the A11 also need rebuilding which date from the 1930s.

The Nazis built around 3,300 kilometres of motorways up until 1939.