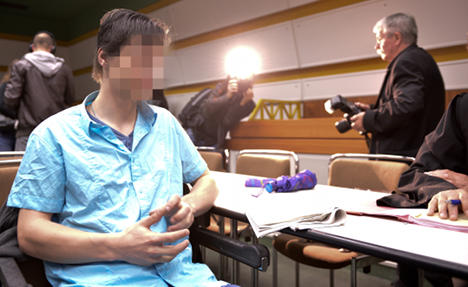 Berlin authorities charged him with fraud after spending €30,000 looking after him before his identity and age were revealed. But a full trial was avoided. “There was no conviction, as all parties in the hearing agreed. He admitted his guilt, and agreed to the 150 hours of community service,” court spokesman Tobias Kaehne told The Local.

“If he fails to carry out the work it will come to a trial and probably a conviction. But as it stands now he will not have a record going into the future. This kind of agreement is made in the interests of young people’s future.”

“Ray” became a global story in September 2011 after turning up at Berlin’s city hall and asking for help. Although he was remarkably clean and appeared well fed, he told astounded officials he had been living in the woods around the German capital for five years with his father, sleeping in huts and a tent and living off the land.

He said he no longer knew who he was nor where he was from – and that after his father died in a fall, he had followed his ’emergency instructions’ and walked north until he reached the city.

“Ray” stuck to his story for months and even attracted the attention of one couple who said he was their long lost son. But he was actually 21-year-old Robin van Helsum from Hengelo in the Netherlands, who was bored with his internship at a telecom company and reportedly confused about the direction his life was taking.

This finally emerged 10 months later after people in Holland recognized a picture of him circulated by the German police. Soon after that he was charged with fraud, with Berlin authorities saying they had spent €30,000 looking after him because they thought he was a minor.

After the truth came out, van Helsum told a Dutch newspaper that “I did think about running away again,” but added that he decided “to stay here and sort out my problems with the authorities.”