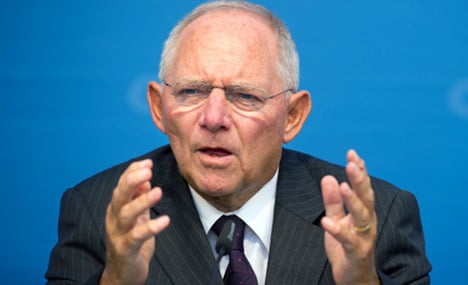 Finance Minister Wolfgang Schäuble from Angela Merkel’s CDU suggested the sweetener could be offered to vanquished left-wing rivals, the SPD who fear a dangerous alliance with the powerful leader.

He signalled that Merkel’s party may soften its opposition to the tax rises demanded on the campaign trail by the Social Democrats (SPD) to pay for welfare and public spending.

“We will have to see how the talks go,” said Schäuble when asked about the tax issue by newspaper Die Zeit, suggesting Merkel’s team is ready for compromises in what may be weeks if not months of horse-trading on policy issues and ministry posts.

The veteran minister said that he personally did not see the need for tax rises but added: “If the future partners for a future government show a modicum of sense, we will surely be able to reach an agreement”.

Schäuble urged speed in talks on who will jointly rule the EU’s biggest economy, warning that “since important decisions are looming in European politics, including on a banking union, I would prefer that we reach agreement quickly.”

The SPD, smarting after their ballot box defeat last Sunday, has made clear it is no hurry to again jump into bed with Merkel’s Christian Democratic Union (CDU), after emerging in bad shape from such an alliance in 2005-09.

If the SPD took a beating from governing in the shadow of popular Merkel, then so did her partners in the latest term, the pro-business Free Democrats (FDP), who faced a ballot box catastrophe and crashed out of parliament altogether.

News weekly Der Spiegel wrote that the ill fortunes of Merkel’s former political partners have led her fearful rivals to dub her “the Black Widow”.

But despite the expected delays in forming a coalition agreement, Merkel’s spokesman said on Wednesday that the government was “fully capable of operating”.

Berlin is working at all levels and on all subjects, and Sunday’s elections in no way mark a “break”, said spokesman Steffen Seibert, adding that Germany’s partners knew this was the case.

Berlin would get involved “constructively” in current international issues, including Europe, he added.