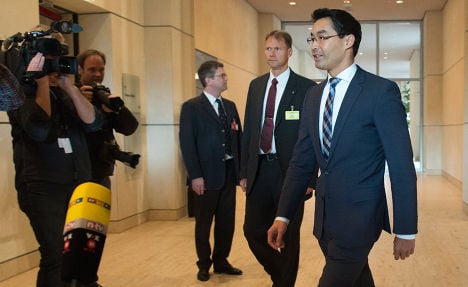 Germany’s former vice chancellor and economics minister hinted on Sunday he would go after the pro-business party’s disastrous showing. He told the party faithful he would “take responsibility” for the result and “make way for a change of direction.”

“We were voted out very deliberately,” said Rösler as he resigned on Monday. “But there are great chances for the future of a Liberal party in Germany.”

“This is a bitter and sad result,” he told his devastated party on Sunday night minutes after exit polls suggested the FDP would not pass the 5 percent hurdle needed to enter parliament.

“This is the worst FDP result in our history,” added fraction head Rainer Brüderle, who went on to thank his campaign team. “It wasn’t your fault, we take entire responsibility.”

“It’s a terrible result, without a doubt,” party member Peter Traub told The Local. “It’s clear that my party in its content or personalities doesn’t match the spirit of the age. We have to think about that seriously.”

“I never dreamed that the FDP would not get into parliament,” said party supporter Dagobert Bieniussa. “There’s no hope now.”

But despite the crushing defeat, the leadership soon came back with fighting talk. “We’ll never give up. It’s not the end of the party. The work of the FDP as a party of freedom will continue,” said Rösler.

Some of the grassroots supporters gathered at the headquarters in Berlin took up the call to arms. But as the results consolidated over the course of the evening, supporters began to mumble dissent.

“Where were the leadership for the past year?” a young male FDP supporter who didn’t wish to be named told The Local. “Both Rösler and Brüderle were too busy to talk to people, to engage. Young voters want something more alive than Brüderle.”

Supporter Hagen Ost said the party had lost touch with its grassroots and the electorate once it got into power in 2009. “It’s only natural,” he said. “Once Gudio Westerwelle [Foreign Minister] and the rest were off doing their ministerial jobs, they didn’t have time for us.”

“The party didn’t make enough of the NSA affair,” said a female supporter who chose to remain anonymous. “It’s about freedom, privacy; those are the party’s core issues. I couldn’t believe it, they hardly said a word.”

“There should have been an outcry from the party but they were too scared to step out of line with the CDU,” she added. “And look where they are now. The CDU have won and we’re nowhere.”

“I think the problem is with the last election,” said another supporter who didn’t wish to give his name. “They promised far too much and then people got disappointed with the party once they got in government. All those tax promises they just didn’t come through on, people don’t forget that.”

Whatever went wrong for the party, one thing is clear. The sudden fall from grace that has seen five former ministers axed overnight will have the whole party doing some serious soul-searching.

“There will have to be a self-critical period now for the party,” added Dagobert Bienuessa. “It might last a long time.”