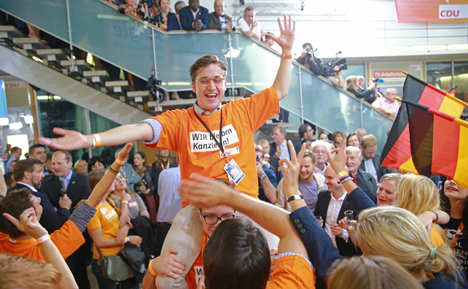 Initial exit polls on Sunday night hinted at the possibility that the CDU could take control of the country single-handed. But the final 41.5 percent of the vote left them just a few seats short of an absolute majority. Merkel is now set to seek a grand coalition with the main opposition party, the SPD.

And although reaction at the Konrad-Adenauer-Haus was jubilant, and the free champagne flowing, there remained uncertainty among experts from the start as to whether Merkel would actually secure the majority.

“It has been a great success for us this evening,” Younes Ouaqasse told The Local. As the youngest member of the Bundesvorstand – the committee that leads parliament – he said that he was remaining cautious as to what the final outcome will be.

“All I want is what is best for Germany,” he said. “If that means a grand coalition with the SPD, then so be it.”

Forging a grand coalition with the Social Democrat (SPD) party looks to be the most likely outcome for the CDU at this point. Their former coalition partner party, the Free Democrats (FDP) polled at a disappointing 4.8 percent. A party has to get above five percent to enter the Bundestag.

Merkel’s second appearance on stage was to a jubilant crowd of supporters. On the cusp on a third term she had nothing but thanks for the voters, and hope for the next four years. “Let’s celebrate today, and work tomorrow, and the day after that,” she told onlookers.

Congratulations came from across Europe on Sunday evening, with European Union president Herman Van Rompuy congratulating her on the win, and expressing confidence that Germany would remain committed to a “prosperous Europe”.

“I am confident that Germany and its new government will continue its commitment and contribution to the construction of a peaceful and prosperous Europe at the service of all its citizens,” he said in a statement, adding: “I look forward to continuing the close cooperation with Angela Merkel.”

General secretary of the Union of European Federalists Christian Wenning told The Local, at the point when it appeared they had won the absolute majority he “was stunned.”

For Wenning, Merkel was key in the CDU’s success. “She’s great, a really nice person who cares about all her supporters.”

Video taken at the CDU HQ: from ITV news